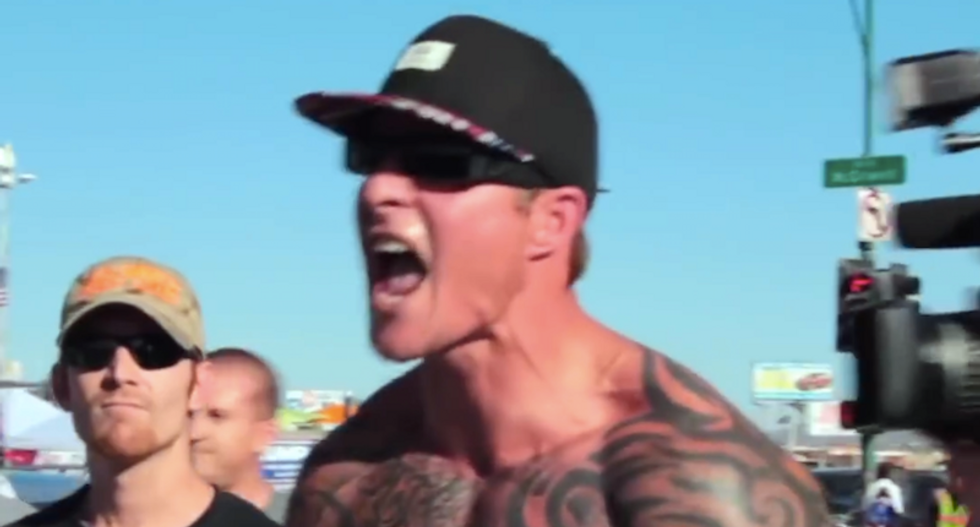 A shirtless man with a white supremacist tattoo went berserk after spotting a Hispanic protester at a Donald Trump rally in Phoenix.

The musclebound man, who hasn't been identified, had a tattoo of the Arizona state flag across his back and the number "43," which is associated with the Supreme White Alliance hate group, reported Gawker.

Photographer Eric Rosenwald recorded video of the man's lengthy and profane rant, which he punctuated by shrieking Trump's name.

"Get the f*ck out of here -- our country, motherf*cker, our country," the Trump supporter screamed in rage. "Proud f*cking American! Made in USA bitch, made in f*cking USA!"

Trump bro defends himself after viral tirade: Whites are ‘only race you can legally discriminate against’

A police officer stood about five feet away, between some protesters gathered on the other side of a steel barricade and the bellowing man , who repeatedly slapped his own chest as he hurled racist insults at the older Hispanic man.

"Go f*cking make my tortilla, motherf*cker," the man howled, extending what appeared to be a Nazi salute. "Build that f*cking wall for me."

Overcome with rage, the man bellowed Trump's name and pledged his loyalty to the Republican presidential candidate.

He then threatened violence against the Hispanic man and anyone else standing on the other side of the steel barricade.

"I will f*ck, like, at least 10 of you up in one f*cking sitting, you f*cking p*ssy," the man said, slightly calmer. "You're lucking all these cops are here, bro. Yeah, you're f*cking lucky, b*tch. Make my f*cking tortilla."

Protesters looked on in bewilderment as the hulking shrieker walked away to wave a Trump campaign sign and lead a chant of the GOP candidate's name, and another grinning Trump supporter looks back to hurl one more insult.

"See that shit, b*tch?" the second man said as he walked away. "That's America."