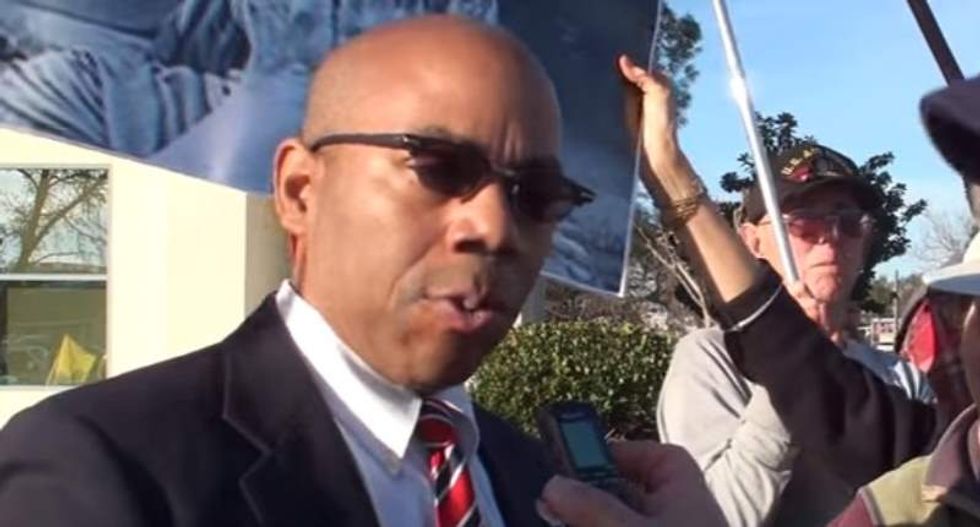 The black supporter who was highlighted by Donald Trump during a rally on Friday identified himself as a Republican congressional candidate who took no offense to the real estate mogul calling him "my African-American."

"To give the black folk the time of the day, I was happy," Gregory Cheadle told the Redding Record Searchlight following the encounter. According to Cheadle, the vast majority of the audience for Trump's speech was white.

The presumptive Republican nominee pointed to Cheadle during the event, saying, "Look at my African-American over here. Look at him. Are you the greatest? You know what I'm talking about?" before relaying an anecdote about another black supporter who punched a protester -- who Trump said was dressed like a Ku Klux Klan member -- at a previous event.

The comment quickly provoked another round of criticism toward Trump. But Cheadle said he was glad for the attention given that politicians traditionally ignore black communities. He also said that he talked to Trump after the event.

"I was at the point he was about to leave and I called out, 'Uncle Donald, Uncle Donald,'" Cheadle said. "He recognized me as the guy he had called out."

Cheadle was much more critical of government in February, when he appeared at a rally honoring Oregon militant LaVoy Finicum, who was part of the group led by Ammon Bundy that seized the Malheur National Wildlife Reserve in Oregon. Finicum was shot and killed after reaching for a gun in his pocket during a confrontation with federal agents, though he has become the focus of conspiracy theories arguing otherwise.

"I'm out here today because as I've said for years, government has become the enemy," he said at the event. "If we the people -- Democrats, Republicans, conservatives, liberals -- if we allow government to roll over us, they will."

Cheadle is one of several GOP candidates in the state's 1st Congressional District running to oust incumbent Rep. Doug LaMalfa (R) in Tuesday's state primary. Under state law, the top two vote-getters, regardless of party, will compete for the seat in the November general election. Cheadle bills himself on his campaign site as an "1856 Republican," meaning he is hewing to the GOP platform from that year, as well as a counterpoint to "the old guard, good ol' boy, statist Republican Party."

Cheadle's comments at the event for Finicum, as posted online, can be seen below.