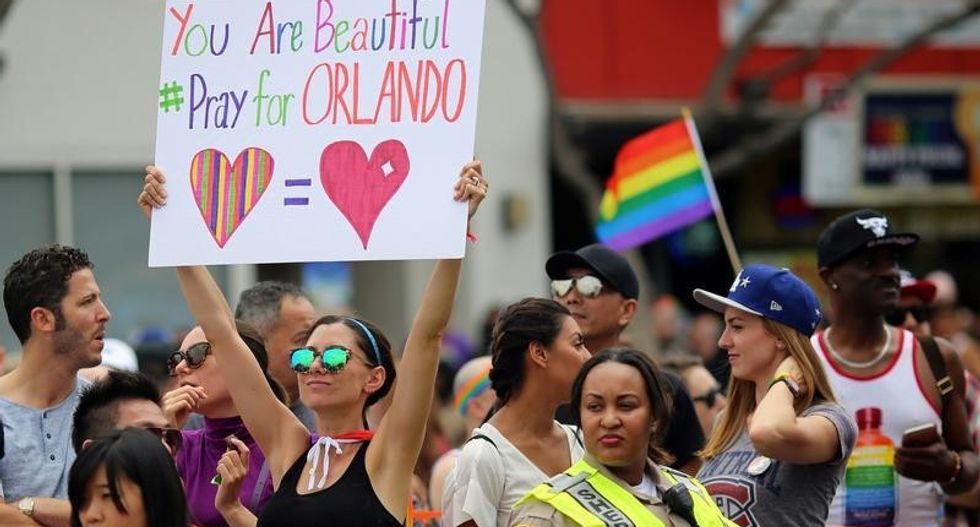 Millions of people draped in the rainbow hues of LGBT pride turned out for parades across the United States on Sunday, two weeks after a massacre at a Florida nightclub stirred fear and solidarity among lesbian, gay, bisexual and transgender Americans.

The march in New York, held every year since 1970, began at noon near the Empire State Building and ended at Greenwich Village's Stonewall Inn, the birthplace of the gay rights movement and the newest national monument.

Police stepped up security to reassure parade-goers and ward off potential threats after a gunman pledging allegiance to the Islamic State militant group killed 49 people at Orlando's Pulse nightclub on June 12. It was the deadliest mass shooting in modern U.S. history.

This was the first of a string of parades planned on Sunday in Chicago, San Francisco and other cities.

In New York and elsewhere, the mood was decidedly subdued for an event that in recent years has evolved from a protest march against police harassment into a roving street party.

"I've been so heartbroken and outraged by Orlando," said Dorothee Benz, 50, who was marching with a group called New York Supports Orlando. "We need to be out loud and proud more than ever, but it comes with mourning and anger."

By contrast, pure joy had emanated from the throngs of people who turned out for pride parades last June, just days after the U.S. Supreme Court legalized same-sex marriage across the country.

Some 2 million spectators had been expected to line the route of New York's parade this year, while organizers forecast a turnout of 1 million in Chicago.

Police in New York beefed up security with helicopter and maritime patrols and an increased presence of uniformed and plainclothes officers, while authorities took similar steps in Chicago.

"We are monitoring from the air, looking for suspicious packages, which people should also report if they see anything," Chicago Police Department spokesman Anthony Guglielmi said by phone from the parade route.

At the head of the Chicago parade, a group carried photos of the 49 Orlando nightclub victims. Later a contingent of marchers donned elaborate, rainbow-colored costumes constructed from hundreds of balloons and carried large letters, also formed by balloons, spelling out P-U-L-S-E.

The lead float in New York's parade carried Pulse owner Barbara Poma and the club's entertainment manager, Neema Bahrami. All told, organizers said the parade would feature 2,000 marchers and 85 floats, most of them adorned with the LGBT rainbow.

The color orange, which has come to symbolize the Orlando victims, was ubiquitous. Many people wore orange bandanas or carried flags with orange stripes as an expression of outrage over gun violence in America and support for tighter controls over firearms.

President Barack Obama designated the Stonewall Inn as a national monument on Friday. It was the first time such an honor has been bestowed in recognition of LGBT Americans' contributions.

The bar was the scene of a 1969 police raid that triggered riots and an impromptu rally that ignited a long struggle to bring LGBT people into the U.S. mainstream and guarantee their rights.

Among the New York marchers were three men from Gays Against Guns, or GAG, a group that was formed since the Orlando shootings.

"We realized that in different facets, the gay community has been supporting common-sense gun laws for a long time, but it has never organized as a gay community," said Chris Arruda, 50, a post-production supervisor for television.

Carrying a sign reading "NRA prepare to GAG," a reference to the National Rifle Association, Arruda wore a pink triangle on his bare chest, an emblem that the Nazis forced homosexuals to wear before and during World War Two.