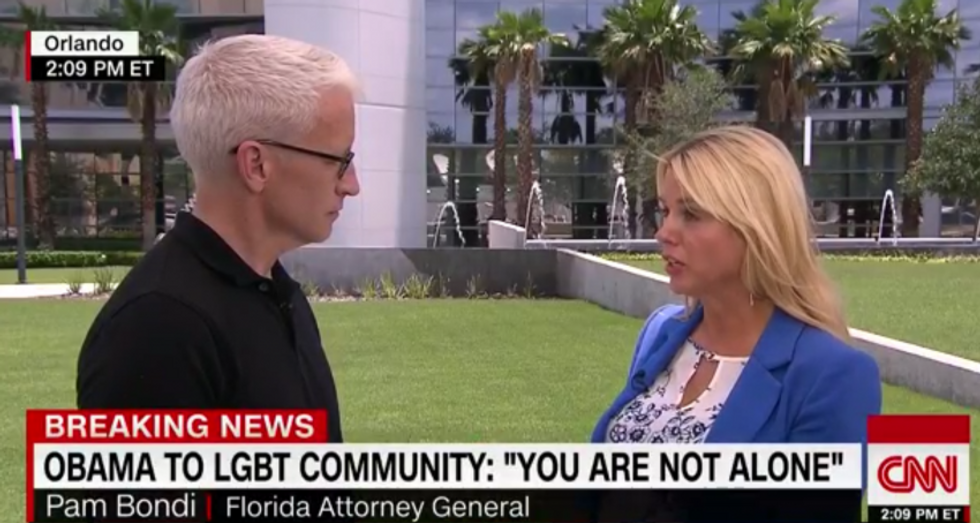 In the wake of the horrific terror attack on a gay nightclub in Orlando, Florida Attorney General and prominent Trump supporter Pam Bondi has been trying to position herself as a champion of the LGBT community. CNN's Anderson Cooper interviewed Bondi today, however, and he positively nailed her for her past work against LGBT causes.

"I saw you yesterday say that anyone who attacks the LGBT community... will be gone after to the fullest extent of the law," Cooper began. "I talked to a lot of gay and lesbian people here yesterday who are not fans of yours, and who said that they thought you were being a hypocrite... You said in court that gay people, simply by fighting for marriage equality, were trying to do harm to the people of Florida... Do you really think you're a champion of the gay community?"

Bondi responded that when she was sworn in as attorney general, she had a duty to uphold the constitution of the state of Florida, which at the time featured an amendment banning gay people from getting married in the state.

RELATED: BUSTED! Florida AG Pam Bondi made up claim about ‘rainbow-hands people’ on her website

Cooper pressed her on her specific language, however, and asked why she had to insist that gay people who wanted to get married would "do harm" to the people of Florida. Bondi said she never believed letting gay people get married would do harm to her fellow Floridians.

In reality, of course, Bondi's office argued that forcing Florida to recognize out-of-state same-sex marriages in 2014 would "impose significant public harm" and Bondi made her fight against gay marriage a key issue in her reelection campaign.

Check out the full clip of Cooper grilling Bondi below.

VIDEO of @AndersonCooper grilling @PamBondi. "Do you really think you're a champion of the gay community?" https://t.co/DOFTxJOPuh
— Brian Stelter (@Brian Stelter) 1465929027.0