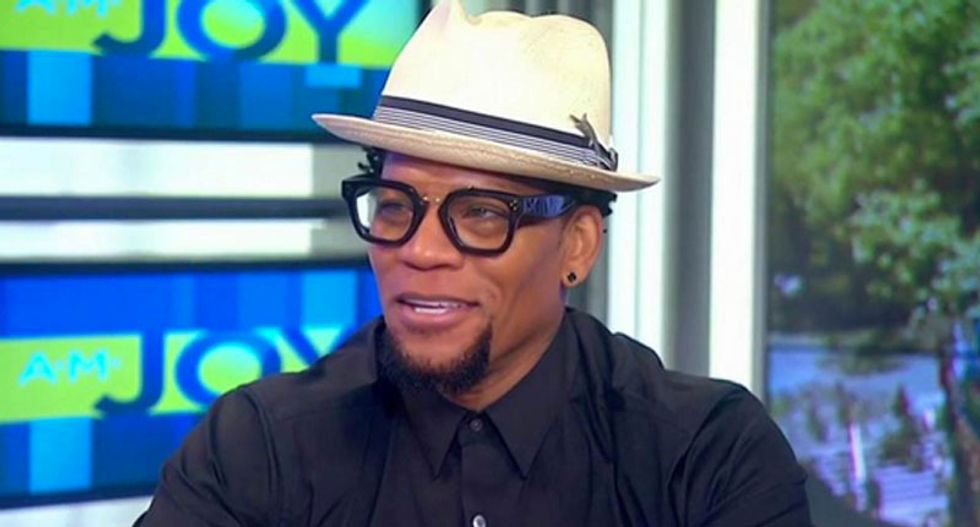 Appearing on MSNBC's AM Joy, comedian and commentator D.L. Hughley had a whole lot to say about the current characters on the political scene -- including Donald Trump, calling him a "circus clown," and a "racist."

Host Joy Reid threw out names for Hughley to comment upon -- and he naturally obliged.

Of President Barack Obama, he said, "The funniest thing about Barack Obama is there are things we want him to do because he's black and he just won't do. Like we want him to go 'Hey, man, that's enough?' And he does it better than like that dude who calls you a liar or some of the stuff. I think he's a decent, humane, thoughtful human being and I think we will miss him when he's gone."

Turning to Hillary Clinton, Hughley called her, "As qualified a human being as I have ever seen run for president," before turning to the idea of a Clinton/Elizabeth Warren ticket -- with Hughley giving it a thumbs up while reserving special praise for Warren.

"This man would react to two competent well-intentioned principled women with glee," he explained. "I don't see anybody -- listen,  everything men have, black men in particular have, we have because of women. Everything we have. Every single thing. It's their time in the sun. It's a shame two women -- I mean, I'm not trying to be offensive, but they seem to be braver. Who fights? Who goes back and forth on Twitter, which is such a dumb notion.  But who does Trump stay away from? Elizabeth Warren."

Turning to Trump, Hughley went off on the presumptive GOP nominee as well as the party he now represents.

"Donald Trump is a racist," he bluntly stated. "He's a racist and anybody who -- listen, Paul Ryan basically said that's textbook racism. So what Paul Ryan actually said is 'a racist is better than a liberal.' If you say that, it's because you're not affected by racism. Everything we are, because liberals built this country, you are what you are because of liberals."

"And I was on with Joe Scarborough, and I don't agree with everything he says, but he brags about this being the 'party of Lincoln.'" the comedian continued. "When you've got to keep referencing the dude on the penny, you better update your resume. Stop it. Everything you enjoy right now, everybody they like now, they hated before. They hated Martin Luther King. Now they pretend. They hated Muhammad Ali, and they didn't like him until he was shaking going up the stairs at the Olympics. They didn't start loving him until he was no longer a threat. You don't get to be a little racist, you don't get to be a little pregnant."