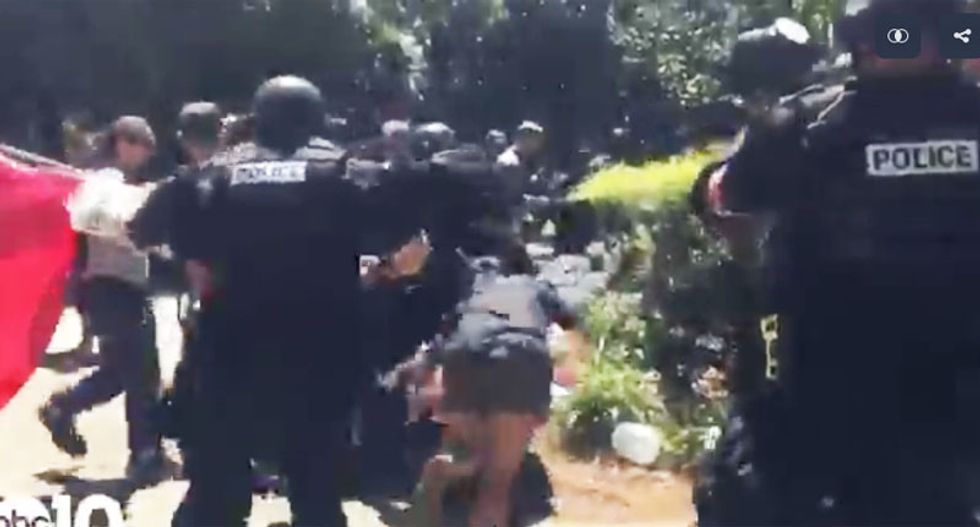 According to ABC10, police were forced to use batons and pepper spray as they chased down suspects after wading into the crowd.

A page set up on Facebook called for the counter-protesters to shut down the rally, stating, "On June 26th 2016, the Traditionalist Workers Party (TWP) is planning a rally at the California State Capitol. The founder of TWP is Mathew Heimbach who is closely affiliated with several white power and neo nazi gangs throughout the United States including The Sacto Skins, Golden State Skinheads, National Socialist Movement, California Skinheads (CAS), Blood & Honor and the Ku Klux Klan. Heimbach had also assaulted a black female protester at a Donald Trump rally in Louisville , Kentucky earlier this year."

"Antifa Sacramento believes in non-sectarian defense of other anti-fascists and a multi-faceted approach to fighting racism. This means that individual people have their own methods of combating hate and we do not criticize others tactics. Our objective is never violence. We believe that hate should not have a platform in our community and we are determined to shut them down. Ignoring them DOES NOT make them go away and will only perpetuate the problem we already have."

According to the LA Times, multiple stabbings were reported with several victims rushed to the hospital with what were described as critical injuries.

Watch the video below via ABC10: