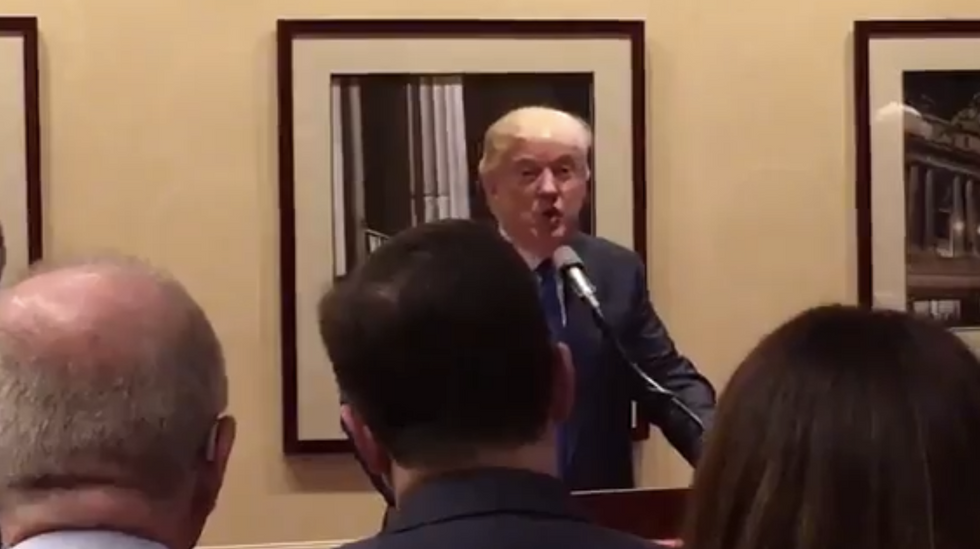 Donald Trump greeted religious right leaders by asking not what Christianity could do for them but boasting about what evangelical voters had done for him.

"Christianity, I owe so much to it in so many ways, through life, through having incredible children, through so many other things," Trump said. "But I also owe it, frankly, from standing here because the evangelical vote was mostly gotten by me. If you remember, I went to South Carolina, and I was going to be beaten -- very heavy evangelical state -- and I was going to be beaten by (Sen. Ted) Cruz or somebody because he had very strong with the evangelicals (vote), and I ended up getting massive majorities on the evangelical vote. Everybody said, 'What's going on? How did Trump do that? And then I went elsewhere and, and I won the whole South and heavy evangelical and Christian vote, and frankly, a Jewish vote, right, where we had Jewish population."

Trump launched a broadside in the so-called "war on Christmas" Tuesday afternoon at the event organized by the anti-LGBT groups Family Research Council, Vision America and AFA Action.

The small crowd applauded appreciatively when he greeted one woman by name, and he continued talking about Christmas.

"When you go to Macy's, you go to these department stores today, you don't see any Christmas ads," Trump continued.

He then warned the conservative Christian crowd against voting -- or even praying -- for Hillary Clinton, who he suggested was an enemy to their faith.

He told them there was only one candidate worthy of their prayers.

"So I think people were saying, some of the people were saying, ‘Let’s pray for our leaders,’" Trump added. "Well, you can pray for your leaders, and I agree with that, pray for everyone, but what you really have to do is you have to pray to get everybody out to vote, and for one specific person. We can’t be politically correct and say we pray for all of our leaders because all of your leaders are selling Christianity down the tubes, selling the evangelicals down the tubes, and it’s a very, very bad thing that’s happening."

Our leaders are "selling Christianity down the tubes" #ConversationWithTrump pic.twitter.com/55PBY26aAv

Not everyone at the event was impressed with Trump or his understanding of Christianity.

evangelical in meeting with Trump says he talks to Christians like a person who just bought Rosetta stone and is practicing for first time
— Jon Ward (@Jon Ward) 1466525543.0