Why medievalists should stop talking about Game of Thrones 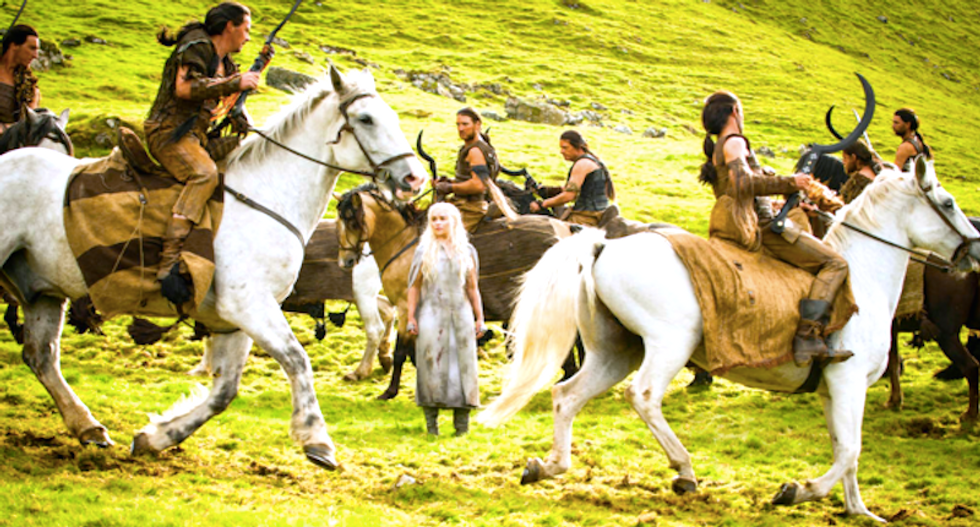 Last month, medieval historians went to war with English Heritage, the charity which manages England’s historical sites. Normally a peaceable bunch, medievalists have taken offence at English Heritage’s use of the term “The Dark Ages” to describe the period from c.400 to c.1066.

The term “Dark Ages” has a number of problems: it suggests a barbaric and blood-soaked period; it implies the absence of literacy or culture; it denotes irrelevance. None of these clichés about the early middle ages hold true, as medievalists far more erudite than me have argued.

Historians even coined a hashtag: #StopTheDarkAges. English Heritage struck back by explaining that they use “The Dark Ages” because any other label would confuse the public.

This may seem like a storm in a very small teacup. But it is part of an argument about public perceptions of medieval history. This is particularly important at a time when university departments (not just history) are under pressure to demonstrate the value of their work to the modern world. Given that the vice-chancellor of Queen’s University Belfast recently remarked that studying the 6th century is not useful to society, agreeing that you work on “The Dark Ages” is to admit your own irrelevance.

Meanwhile, season six of Game of Thrones has been airing. Talking about Game of Thrones is one way in which medieval historians have attempted to engage with the public. There’s recently been a glut of articles – some on this website – explaining how Game of Thrones is “realistic history”, or how various characters draw on real medieval figures.

But I am sceptical about using Game of Thrones as a way into medieval history. This may sound like an academic historian sneering at popular culture from her ivory tower (like the High Hall of the Eyrie, but nicer). That is not the case: I think Game of Thrones is worth analysing – but as a piece of literature or drama, not as history.

This is for two reasons. The first – at the risk of stating the obvious – is that Game of Thrones isn’t set in the Middle Ages, or any specific part of it.

George R R Martin has said The Wall was inspired by a visit to Hadrian’s Wall and imagining a Roman soldier staring out into the unknown. The fight between the Targaryens and the Lannisters is supposedly based on the English Wars of the Roses. Littlefinger resembles a bargain basement Machiavelli.

Game of Thrones is a chaotic amalgam of periods and places with dragons thrown into the mix. If it’s not set in any one period, we’re limited in how far we can discuss it in relation to “history”. We can only talk about vague ideas of “influence” and “inspiration”, terms which can mean anything. Being set in every period and no period, chronology is also a problem: it implies that all “pre-modern” history can be mashed together, without any sense of change or development.

Second, and more importantly, describing Game of Thrones as “medieval”, even in its inspiration, reinforces the problem of “The Dark Ages”. The central theme of the programme is arbitrary violence. Everybody, or almost everybody, dies in the end, and dies horribly. Doing so reinforces the idea that life in the medieval period was nasty, brutish and short.

Of course, the Middle Ages was not a time of universal peace and love. But medieval societies also recognised concepts of justice, moderation and peace-making. The unpredictable and brutal violence of Game of Thrones is – in my view at least – distinctly modern: it looks more like the casual brutality of Islamic State, for example, than Anglo-Saxon England or Carolingian Francia.

I’m aware that I risk offending colleagues as I make this argument. Many have written clever and interesting articles about Game of Thrones. This is not intended as a personal attack: their scholarship is impeccable. The problem is our collective direction of travel. We risk setting up medieval history as something “ornamental”, relegating it to the status of fantasy, as alien to the modern world as Whitewalkers and Wargs.

I am not saying historians should refuse to engage with any form of popular culture. It is well worth talking about historical dramas: Wolf Hall, The Last Kingdom, The White Queen, even (incredibly dodgy accents notwithstanding) The Tudors. These dramas have their failings, but present more-or-less real historical events to discuss. What’s more, film or fiction can convey a sense of how it might have felt to live through the Reformation or experience a Viking raid, something academic history finds difficult to capture.

Let me offer one further practical suggestion. Instead of looking to Westeros, medievalists should look to northeast England. Bede’s World is a museum in Jarrow, Northumbria, commemorating the life and writings of the early medieval monk Bede (d. 735), and highlighting the importance of the great medieval Kingdom of Northumbria (653-954). It combines museum exhibits with archaeological reconstructions of Anglo-Saxon buildings. It powerfully challenges the idea that this was a “dark” time in English history. But Bede’s World closed in February due to lack of funds, although the local community is fighting to reopen it.

This may seem a small and local preoccupation compared to the global reach of Game of Thrones. But if we want to stop the dark ages, Jarrow is where we need to start.

By Philippa Byrne, Postdoctoral Fellow in History, University of Oxford