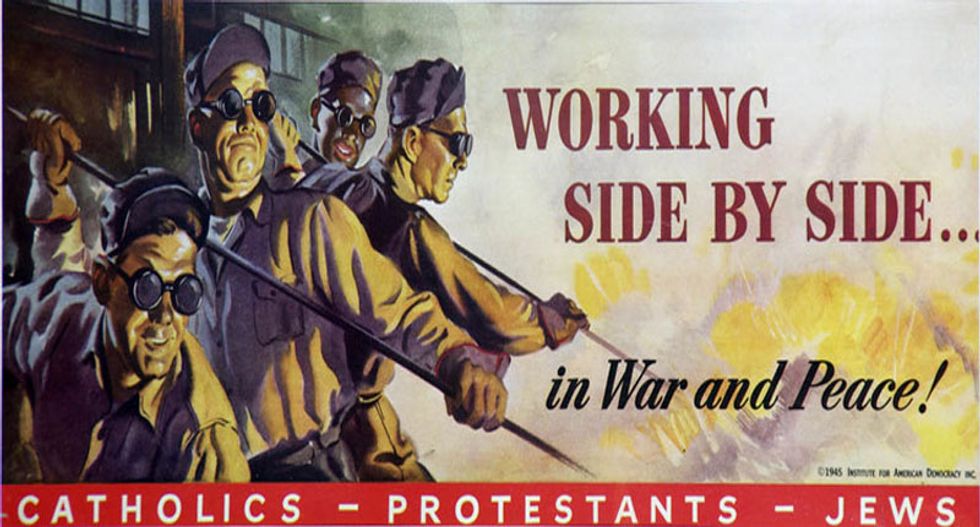 The U.S. is in the midst of a tepid economic recovery following a catastrophic downturn, but millions of Americans continue to feel left behind. Some turn their anger on corporations and Wall Street. Others target nonwhite immigrant workers. A charismatic media personality with a populist message attacks religious minorities. Conservatives denounce the president and his allies for flouting the Constitution and steering the United States toward socialism. Meanwhile, many on the left warn that fascism is taking root in America.

This may sound like 2016, but in fact it describes the U.S. toward the end of the Depression decade.

The parallels between the two eras aren’t perfect, but in the late 1930s – as today – political rancor, social division and the threat posed by “alien” ideologies sparked widespread unease. And just as politicians and commentators in recent weeks have called for “unity” in the face of political and racial strife, so too did their counterparts in the late 1930s.

These earlier Americans acted on their words.

During the late 1930s and 1940s, an array of American elites from business executives and government officials to clergymen and Hollywood tycoons launched a variety of efforts to build civic unity and national consensus. These efforts continued into the early 1960s.

Indeed, such campaigns are one reason that many Americans today think of the immediate postwar decades as a golden age of harmony and concord.

As a historian who has looked closely at these midcentury efforts to cement national cohesion, I believe that while they offer a model, they also offer a warning.

In November 1936, Americans went to the polls and awarded Franklin Delano Roosevelt a second presidential term. It was one of the most lopsided elections in U.S. history, with Roosevelt winning almost 61 percent of the vote.

Any sense of unity that the election provided, however, rapidly unraveled in the face of a new economic downturn, a Supreme Court crisis and emerging divisions in the Democratic Party.

The late 1930s were marked by sit-down strikes, violent repression of workers, and attacks by vigilante groups on Jews, Catholics, racial minorities and leftists.

Father Charles Coughlin, the charismatic “radio priest” whose economic populism had attracted an audience of millions (one in 10 American families with a radio tuned in regularly), turned in 1938 openly and stridently anti-Semitic. Coughlin’s followers and members of other newly formed anti-Semitic groups held mass rallies, stockpiled weapons and beat up Jews.

Meanwhile, Communists, preaching a mix of class and racial equality, made inroads in the labor movement, among artists and intellectuals, and in minority communities. They could claim 82,000 members and many more sympathizers by the close of 1938.

All this alarmed American elites across the political spectrum.

Those on the left saw in union-busting, red-baiting and surging intolerance evidence of what The New York Times and others called “an American brand of fascism.” Those on the right believed trade unionists, leftists and, above all, New Dealers were ushering in “state socialism.”

Members of both groups urged Americans to unite around “shared” national values, although they often disagreed on precisely what those values were.

Temporary unity came with the bombing of Pearl Harbor and U.S. entry into World War II. But in 1943 – and again in 1946 – the U.S. was rocked by massive strikes, race riots and other forms of social unrest.

One of the worst wartime race riots occurred in Detroit in June 1943. By the time federal troops were called in to quell the riot, 25 blacks and nine whites lay dead. Nearly a thousand people had been injured.

U.S. elites responded to this turmoil with numerous initiatives designed to promote social harmony and consensus. They were aided by a new infrastructure of institutions – some public, others private – that emerged immediately before and during World War II.

For instance, during the war, the National Conference of Christians and Jews preached interfaith tolerance in military installations and USO canteens from Norfolk, Virginia to Nome, Alaska.

After the war, the NCCJ and several other groups worked with the newly formed Advertising Council on a long-running public service campaign dubbed “United America.” Using radio spots, car cards and other forms of advertising, they urged Americans to “keep America strong” by “isolating and quarantining group antagonism,” not only between religious, racial and ethnic groups, but also between management and labor.

The Advertising Council played a key role in the most ambitious “unity” campaign of the era, the Freedom Train.

Between September 1947 and January 1949, a red-white-and-blue locomotive carried more than 120 original documents and artifacts – ranging from Thomas Jefferson’s rough draft of the Declaration of Independence to the flag planted at Iwo Jima – through hundreds of cities in all 48 states.

The train’s journal was coordinated with hundreds of local celebrations dubbed patriotic “revival meetings” and a nationwide media blitz. Conceived in the attorney general’s office, organized by movie and advertising executives and financed by America’s largest corporations, the Freedom Train portrayed a nation that was unified, consensual and inclusive.

This veneer of unity, however, concealed a behind-the-scenes contest over America’s core values.

Which documents should be included in the exhibit? How should they be interpreted? Should a train displaying the Emancipation Proclamation allow segregated viewing in stops below the Mason-Dixon line? Even the word “democracy” – which had both political and economic overtones – was ultimately deemed too controversial to be used in slogans and press materials.

After race riots exploded across the country in 1943, hundreds of cities, states and community organizations set up committees designed to defuse racial, religious and ethnic tensions.

The “Civic Unity Movement,” as this campaign was called, focused attention on the “race problem” in America and achieved some real gains. The Toledo board, for instance, persuaded local hospitals to hire black nurses.

Too often, however, these groups shunned tactics that risked increasing tensions by antagonizing racists. In Chicago, for instance, black efforts to move into neighborhoods claimed by whites led to hundreds of racial incidents – vandalism, arson bombings and full-scale riots – between 1944 and 1949.

Yet, as historian Arnold Hirsch has shown, these events were barely covered by the city’s metropolitan dailies. City unity commissions convinced Chicago’s white-owned newspapers that covering such episodes would only fan the flames of racial unrest. This helped to sustain an image of racial harmony and consensus that was often at odds with events on the ground.

Such unity-building efforts did help to discredit open prejudice against both religious and racial minorities. For the most part, however, they failed to address the structural inequalities of race and class that have haunted this nation for decades.

By marginalizing dissenters and casting all who disrupted national unity as somehow un-American they shored up existing power structures and left intact the social and economic status quo.

By the mid-1960s, the resulting tensions could no longer be contained. A new round of race riots in Los Angeles, Newark, Detroit and other cities called attention to America’s continuing economic and racial inequalities. This is a lesson that our current national leaders would do well to remember.