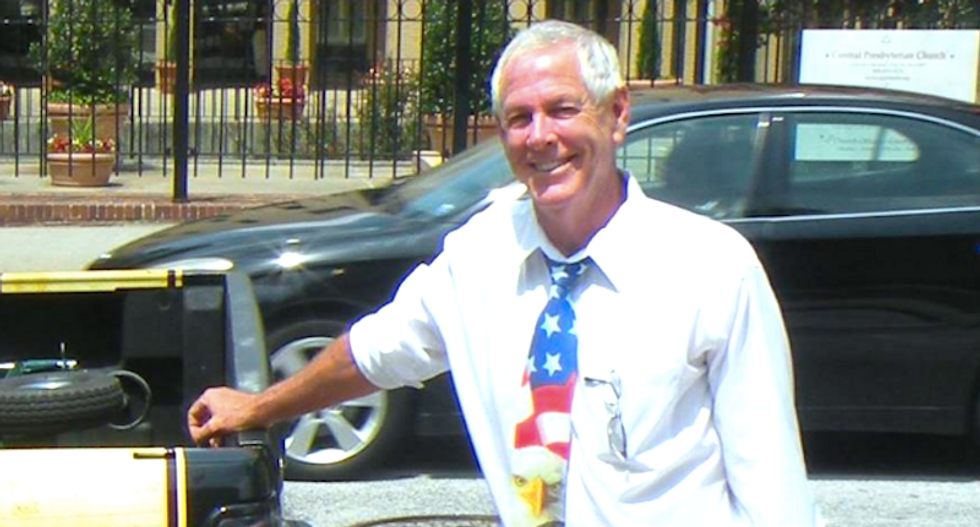 County officials in Georgia laughed along with residents after a group of anti-government demonstrators tried to arrest them for doing their jobs.

Swensson, who has filed lawsuits challenging Barack Obama's ballot eligibility, walked into the regularly scheduled meeting and ordered police officers take the four officials into custody for violating their oaths.

“I’m here to invoke my absolute and guaranteed rights to also effect a citizen’s arrest,” Swensson said. “It is also incumbent on the peace officers to now take them into custody. This meeting should officially be over because you guys have been in violation on the fact you still hold state money."

Police officers at the meeting did not arrest the officials, or the demonstrators -- who announced themselves during the public comments portion of the meeting..

“Rather than a speech, this will be a demonstration,” said demonstrator Paul Nally, of Barstow County. “This is what happens when public officials ignore the rights, privileges and immunities of citizens."

“I command peace officers here, right now, and take possession,” Swensson said. “If you do not, then you are in violation of your oath and violation of all that is sacred to everybody here in this county. Please do not hesitate, please do your job, please take custody right now. We need resolution. We’re not getting it at the national level and we only have the local level to deal with.”

Swensson, of Henry County, has founded citizens' grand juries and other extralegal groups to pester elected officials with lawsuits and criminal complaints based on his belief that local, state and federal governments are illegitimate.

The anti-government demonstrators eventually left the commission chambers and were told by police that they would be arrested if they tried to come back and charged with assault if they attempted to make the arrests themselves.

Swensson, who use the sovereign citizen name "carl -alfred: Swensson" for court filings, was told by the Clayton County Sheriff's Office not to return to the courthouse unless he had official business.

He also must notify the sheriff of his visits two days in advance and go through security checkpoints required of all visitors.

The county commissioners got back to their meeting after Swensson, Nally and the other activists left, but not without joking about the demonstration.

Edmondson, one of the commissioners, joked about the anti-government demonstrators during a discussion of proposed pay raises for several employees of the district attorney's office.

“Is this still necessary now that she’s been arrested?” Edmondson said. “Can I make that motion since I was also arrested?”

The chamber erupted in laughter at his joke, the newspaper reported.

Watch the demonstrators attempt to perform the arrests in this video posted online by carl alfred:

Watch Swensson discussing his lawsuits against Obama during an interview with right-wing Pastor James David Manning:

Here he is speaking at a meeting of the Henry County Board of Commissioners: