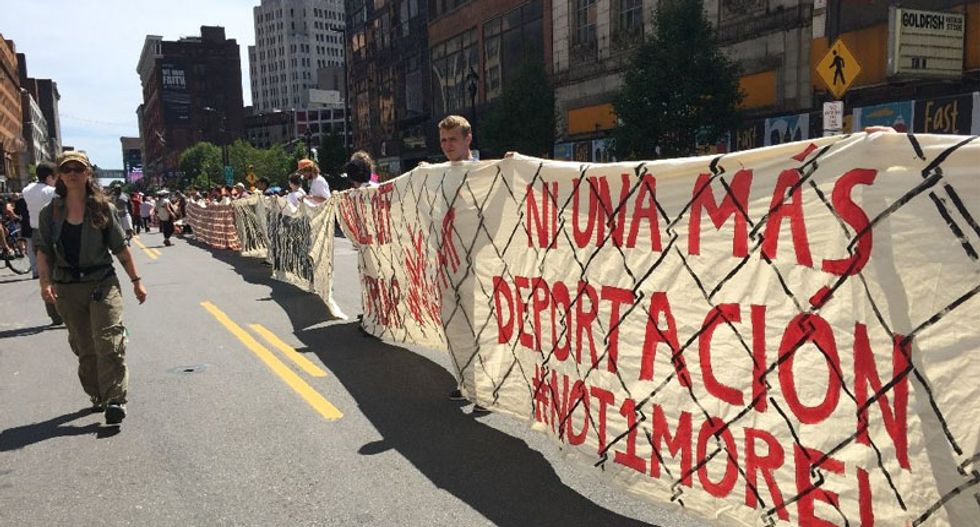 Anti-Trump protesters hold up a "wall" during a rally outside the Republican National Convention in Cleveland, Ohio on July 20, 2016 (AFP Photo/Nova Safo)

One of Donald Trump's calling cards has been his promise to build a wall on the US-Mexico border -- a promise that has won him ardent supporters in the Republican party.

So on the streets of Cleveland Wednesday, as the Republican National Convention entered its third day, protesters sought to stand up to Trump with a wall of their own.

A small group unfurled a canvas wall more than a block long -- parts of which carried statements such as: "Stop hate" and "Wall off Trump."

Black, Latino and Asian -- the group resembled the very diversity and youth that Republicans know they need to court in order to win elections.

And yet, this group was firmly in opposition to Trump's stance on immigration, which has included pledges to deport all 11 million undocumented immigrants from the US as well as build a border wall on the Mexican border.

Protester Eric Cruz Lopez, a 20-year-old undocumented Mexican immigrant who was brought to the US when he was seven, said he works with many young undocumented people who are living in fear.

Monica Chan, also 20, traveled from California, where she said her Asian-American community is concerned about how a Trump presidency would affect them.

"My own father, who is not invested in politics -- he's listening now. He is paying attention, because he has fear of a Trump presidency," said Chan, adding that she is concerned about the anti-immigrant sentiments that Trump has tapped into.

Observing the protest from the sidelines was California Republican delegate Dean Stoecker. His response illustrated the divide between the party and the groups represented by the protesters.

"They clearly don't understand the issue of immigration," Stoecker said. "We either have a country or we don't. We have borders. We need to protect ourselves."

"Trump is going to win the Hispanic vote," he added.

National polls show that the share of Hispanic voters supporting Trump is anywhere between less than a fifth to a little more than a quarter. Among young voters, two recent polls found presumptive Democratic nominee Hillary Clinton leading Trump by double-digit margins.