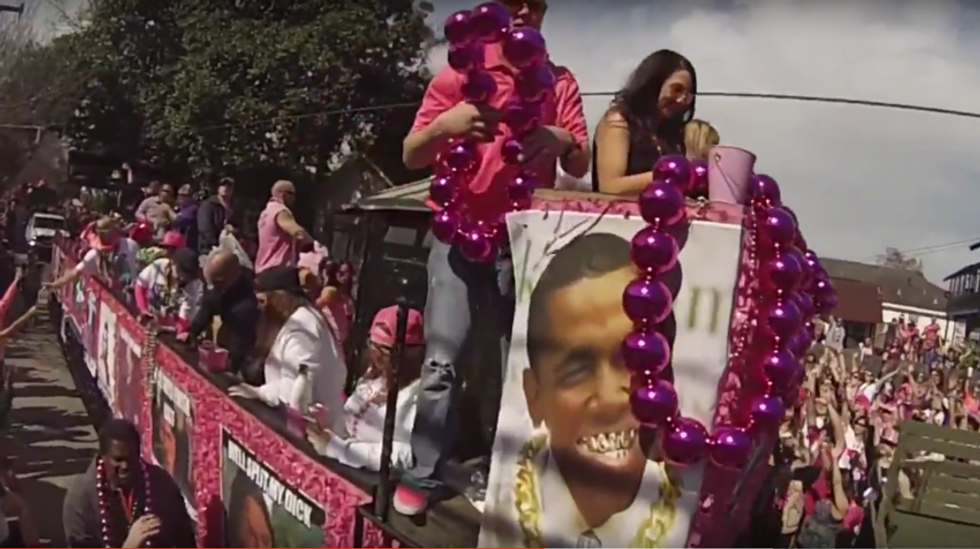 Yes, it seems that Louisiana's capital city has a race problem.

A video of Baton Rouge police officers fatally shooting 37-year-old black man Alton Sterling sparked nationwide outrage on Wednesday. This shooting did not happen in a vacuum, as Baton Rouge has a very troubling recent history of racial animosity.

If you want an example, look no further than the Spanish Town Parade that occurred earlier this year and that featured floats that mocked black people who were killed at the hands of police and that portrayed President Obama as a pimp. Parade goers also waved Confederate flags around, as these pictures demonstrate:

The most offensive image here is the one of the pink flamingo -- which is the parade's official symbol -- getting punched by a fist with a sign that reads, "I can't breathe!" hung around its neck. This is a clear reference to Eric Garner, a New York man who died after being placed in a banned chokehold by police.

The float also makes fun of the Black Lives Matter movement with its own hashtag #PinkLivesMatter.

McClatchy notes that a lot of the floats in the Spanish Town Parade are designed to be offensive, but some local residents think that making fun of a black man who was killed at the hands of police during Black History Month takes things way too far.

"This is the type of racist trash that comes out every year around Mardi Gras – its cast off as satire and the black community is called 'sensitive' or told we are 'playing the race card' when we address it," wrote local publisher Gary Chambers earlier this year. "No, it’s racist hatred and it’s not funny."

Watch a video of the 2016 Spanish Town Parade below.