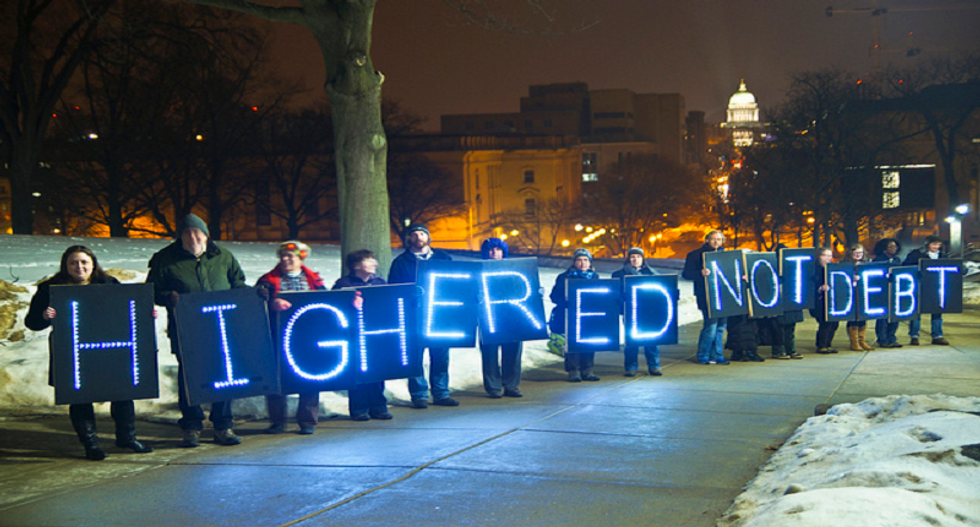 Protesters from the Overpass Light Brigade on the University of Wisconsin-Madison campus in March 2014 call attention to the student debt crisis. (Flickr)

Alumni of the now-bankrupt Cornithian Colleges, which the federal government charged with predatory loan-lending practices more than a year ago, are still being targeted by private collectors eager to cash in on the loans that left so many students in crippling debt.

According to Salon, Public Counsel, a pro-bono interest law firm based in Los Angeles, has filed a class-action lawsuit on behalf of the more than 100,000 students who attended the now-defunct, for-profit college. The lawsuit seeks to cancel all of the debt the former Corinthian students accrued from private interest loans, also called Genesis loans, that the college sold to third-party collectors.

But Salon writes that although many Corinthian alumni have already managed to get their federal loans forgiven, and although a federal court has declared that Genesis loans are fraudulent, the collection agencies who bought the private loans from Corinthian are still harassing the students, demanding that they pay up. The lawsuit seeks charges against these debt sharks, and to cancel all of the alumni's debt completely.

As Salon reports, Corinthian preyed on students for years, lying to them about career prospects and urging them to "enroll in expensive programs that cost up to 10 times as much as a community college degree." The college was able to issue thousands of meaningless diplomas to students before their scam caught up with them, causing them to file for bankruptcy in May 2014.

While Corinthian's college con was still running, the for-profit institution was able to horde taxpayer money in the form of state and federal grants. But in order to issue federal loans to their students, Salon writes, "Corinthian had to pass the '90/10 rule,' meaning that at least 10 percent of their income had to come from sources outside the U.S. government."

This is where the Genesis loans came in. Corinthian set up the private loan program, Genesis, and manipulated their student body into applying for the private loans, which were often double the interest rate of those which the federal government issued, and which had to be paid back at least in part before graduation. A legal complaint issued in September 2014 by the Consumer Financial Protection Bureau (CFPB) claimed Corinthian staffers often pulled students out of class and even told them they had to apply for Genesis loans before getting their diplomas.

By the time Corinthian went bankrupt in the summer of 2014, Salon reports, the majority of the Genesis loans had already defaulted, and the now-defunct college network, "passed on $505 million in this debt to Turnstile Capital Management, a debt collector specializing in defaulted loans, at four cents on the dollar." The loans were then passed on to the Balboa Student Loan Trust, and another company, University Accounting Service, harassed Corinthian alumni daily to try to get them to pay back their mountain of private debt.

Salon notes that in October 2015, the CFPB won a judgement against Corinthian in federal court, and the judge ordered that the for-profit college pay back their former students $531 million in restitution for the fraudulent private loans. But since Corinthian went bankrupt and folded a year before, it never paid back its alumni.

Even though the Obama administration has forgiven much of Corinthian students' federal loans, with the Genesis loans now in the hands of private debt collectors like Turnstile Capital, the alumni are still getting harassed for millions of dollars worth of loans that federal courts have ruled were fraudulently doled out to them.

Laura Hanna of the Debt Collective, a student debt activist organization, told Salon that the case against the Genesis loans is clear. “People are being victimized by predatory lending," Hanna said. "Why is it that these loans are still out there?”