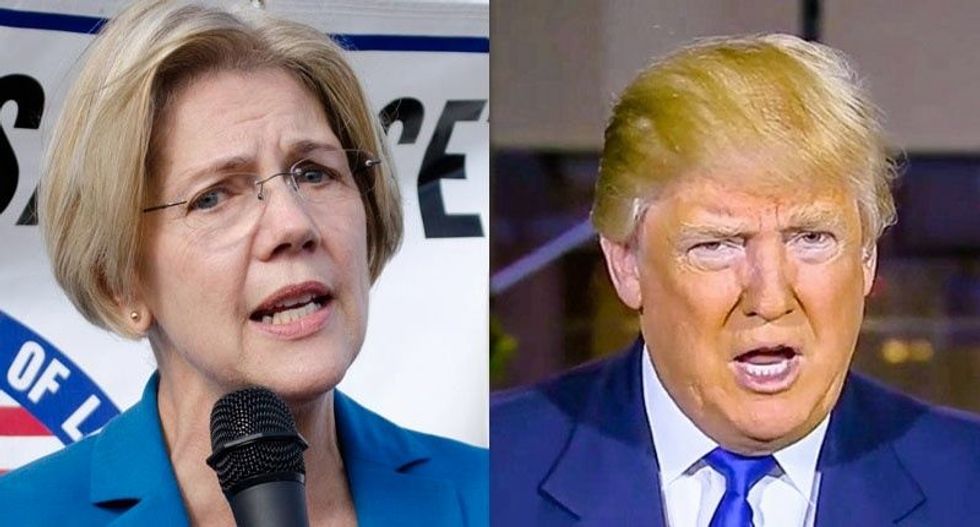 Trump took the troll bait, firing back, harassing the senator as "Goofy Elizabeth Warren, who may be the least productive Senator in the U.S. Senate, must prove she is not a fraud," he tweeted. "Without the con it's over." He managed to refrain from using racist insults that mocks Native Americans as he has done in the past.

Goofy Elizabeth Warren, who may be the least productive Senator in the U.S. Senate, must prove she is not a fraud. Without the con it's over
— Donald J. Trump (@Donald J. Trump) 1468728949.0

I hope that Crooked Hillary picks Goofy Elizabeth Warren, sometimes referred to as Pocahontas, as her V.P. Then we can litigate her fraud!
— Donald J. Trump (@Donald J. Trump) 1468757686.0

If Goofy Elizabeth Warren, a very weak Senator, didn't lie about her heritage (being Native American) she would be nothing today. Pick her H
— Donald J. Trump (@Donald J. Trump) 1468758244.0

Warren's tweetstorm on Saturday assailed Trump and his new running-mate as "two small, insecure, weak men who use hate & fear to divide our country & our people." She also remarked that Pence "is famous for trying to control women's bodies." The Trump/Pence "sexism" is "in line with the party platform," she tweeted.