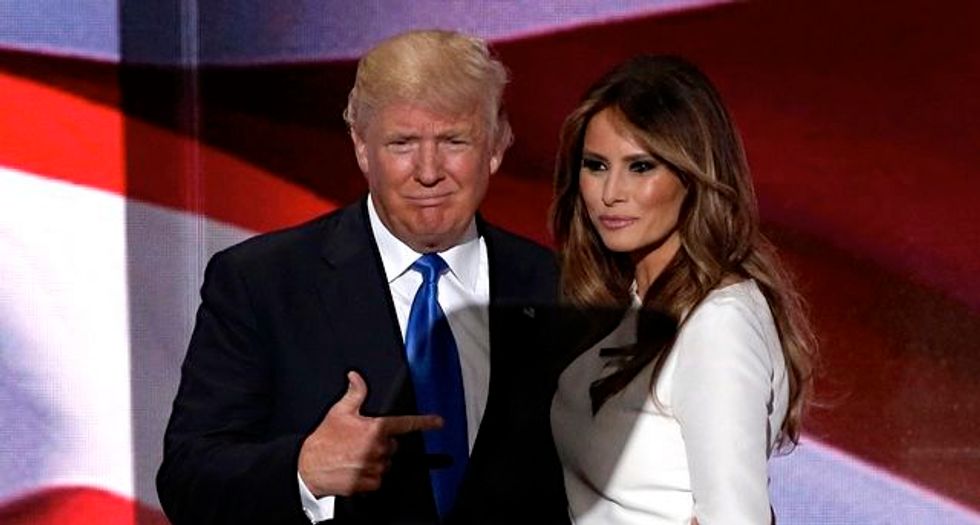 Donald Trump gestures at his wife Melania after she concluded her remarks. REUTERS/Mike Segar

Accusations of plagiarism in a speech by Donald Trump’s wife dominated the Republican convention on Tuesday just when the party was due to formally nominate her businessman husband as its White House nominee.

Melania Trump's address to the convention in Cleveland on Monday night contained a section that was strikingly similar to words delivered at the Democratic convention in 2008 by the woman she hopes to succeed as first lady, Michelle Obama.

As critics accused her of lifting passages from that speech, a Trump campaign official suggested the similarity was the result of an error by Melania Trump's speech writers.

Republican National Committee Chairman Reince Priebus said he would probably fire the writer if that was the case.

Later, however, Sean Spicer, chief strategist for the RNC, dismissed the controversy as “silly” and said there was no need to fire anyone.

Speaking on CNN, Spicer said the words at issue in the speech were “common phrases” used by people like singer John Legend and the character Twilight Sparkle, the unicorn pony that stars in the animated series “My Little Pony Friendship is Magic.”

The controversy raised questions about the Trump campaign's attention to detail as the 70-year-old New Yorker squares off against the larger, more organized operation of Democratic rival Hillary Clinton in the race to win the presidential election on Nov. 8.

Melania Trump's speech followed rowdy scenes on the floor of the convention on Monday, the first day of the gathering, when Trump opponents staged a failed attempt to force a vote opposing his candidacy.

Trump, a real estate developer and former reality TV star who has never held elective office, is trailing Clinton, 68, in many opinion polls after a bruising Republican primary season. The party is trying to turn attention to its formal declaration of Trump as its presidential nominee on Tuesday night.

Convention organizers are worried about political protests in Cleveland but so far demonstrations have been peaceful. Three women were arrested on Tuesday after climbing a flagpole near the convention site and hanging an anti-Trump banner.

In Melania Trump's roughly 15-minute address on Monday night, a small section closely resembled a part of Michelle Obama’s speech in 2008 in support of her husband, Barack Obama, who was then campaigning for his first term as president.

In that section, Melania Trump, a Slovenian-born jewelry designer and former model, talked about passing on to the next generation the value of hard work that she inherited from her parents and said "the only limit to your achievements is the strength of your dreams and your willingness to work for them."

Hours before giving the speech on Monday, Melania Trump told Matt Lauer, the anchor of NBC's "TODAY," that she wrote it with as little help as possible. But her husband's campaign manager Paul Manafort, told CBS's "This Morning" on Tuesday that it was a collaboration with speech writers.

Democrats said the speech showed that Trump's team is not ready for prime time.

Trump himself made no mention of the accusations about plagiarism in a Twitter post early on Tuesday, saying simply: "It was truly an honor to introduce my wife, Melania Trump last night. Her speech and demeanor were absolutely incredible. Very proud!"

Melania Trump's big night failed to draw in bumper audiences to the major TV networks. Preliminary data from ABC, NBC and CBS showed some 10 million Americans watched during the time she was on stage, compared with the roughly 11 million people who watched the first night of the Republican convention in 2012.

Trump's campaign has been marked by frequent controversy over his rhetoric on immigration and trade, which has alarmed many in the Republican establishment.

Party officials are hoping to use the convention to smooth out some of his rough edges and present him as a job creator and a strong hand to combat national security threats and violent crime at home.

Trump's vice presidential running mate, Indiana Governor Mike Pence, urged the party to put divisions behind it after the primary season, in which Trump beat 16 rivals for the nomination.

"My fellow conservatives, It’s time for us to come together. Come together around this good man and reelecting Republican majorities in the House and the Senate," Pence said at an event for conservatives in Cleveland.

House of Representatives Speaker Paul Ryan, the top U.S. elected Republican, was due to formally chair the session placing Trump's name forward later on Tuesday to be the party's nominee. Trump was to receive the blessing on stage of other senior Republicans, such as Senate Majority Leader Mitch McConnell.

Both Ryan and McConnell need Trump to do well in the November election as they seek to preserve majorities in Congress.

The theme of Tuesday's convention event was "Make America Work Again," and speakers were to take aim at Obama's record on the economy.

Security forces were on high alert in Cleveland. Wright State University, a public university located near Dayton, said on Tuesday it had decided not to host the first U.S. presidential debate scheduled for Sept. 26, citing mounting costs and security concerns. The event will now be held at Hofstra University in New York.