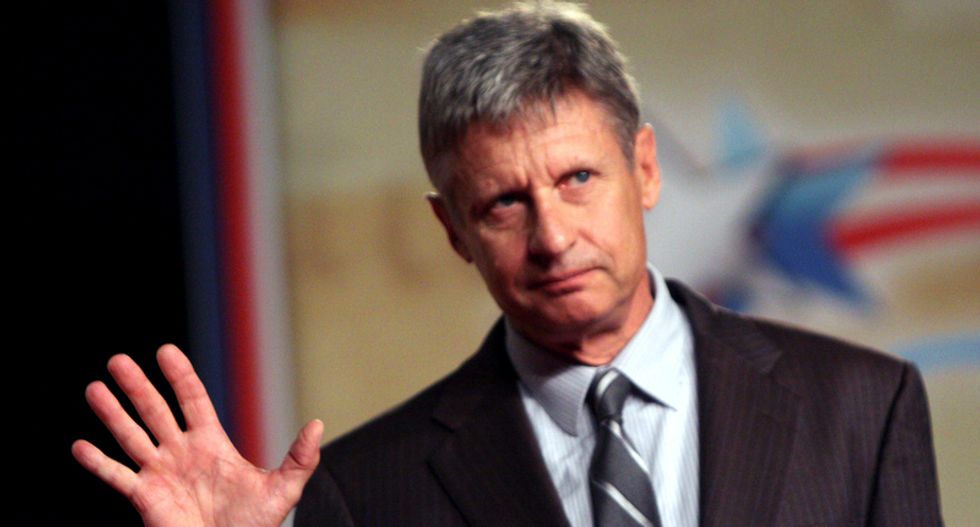 Former New Mexico Republican Governor Gary Johnson is running as the Libertarian candidate for President, and in some polls, is running as high as 9-12 percent in a four way race, with Jill Stein, the Green Party candidate, gaining about 3 percent in most polls.

This is due to the disillusionment of many Americans with the choices for President of the two major political parties—Donald Trump for the Republicans and Hillary Clinton for the Democrats. But the question is whether Gary Johnson, and his running mate for Vice President, former Massachusetts Republican Governor William Weld, could actually do as well as the polls indicate, and whether that would end up causing a constitutional crisis in November, when the election results are in.

The various polls which decide who should compete in the upcoming three Presidential debates and one Vice Presidential debate could allow Johnson and Weld to participate, with the threshold being 15 percent in a group of polls by a certain date in September, as was allowed for John Anderson in 1980 and H. Ross Perot in 1992. If that occurred, that could have a major impact on the race. And the news from Johnson that Mitt Romney, the 2012 Republican Presidential nominee, is considering an endorsement of him, opens up the possibility that other recalcitrant Republicans who refuse to endorse Donald Trump, might just endorse the Johnson-Weld team and give them more legitimacy, and the potential to do better than anyone would imagine at the present.

The question arises which states might Gary Johnson have the potential to carry in a splintered race. It would seem to this author that the following states could give Johnson a plurality, and therefore, their electoral votes:

Alaska—(3 electoral votes)—This state has long had a libertarian streak and would find Johnson’s unwillingness to promote any serious gun control very appealing.

Idaho—(4 electoral votes)—Idaho is suspicious of the federal government as well, and would find Johnson someone they could very well support.

Maine---(4 electoral votes)—Maine is a very independent oriented state, which has elected independents as Governor and Senator, so could be fertile ground for Johnson.

Montana—(3 electoral votes)—Montana is similar in its views on the federal government and on guns, so could join Idaho in supporting Johnson.

New Hampshire—(4 electoral votes)—New Hampshire has a very prominent libertarian streak, going back a long time historically, and has the motto: “Live Free Or Die,” adopted by the state in 1945, so definitely could go for Johnson.

New Mexico—(5 electoral votes)—This home state of Johnson, who was Governor for two terms from 1995-2003, could support its former Chief Executive, and in fact, this is the one state most likely to support the Libertarian nominee.

Utah—(6 electoral votes)—The Mormon state has never trusted the federal government, and polls indicate that the 60 percent Mormon population hates Donald Trump, but is not anxious to support a Democrat such as Hillary Clinton, with Utah last voting Democratic in 1964 to reject Barry Goldwater.

Wyoming—(3 electoral votes)—Wyoming, like its neighbors Idaho and Montana, is skeptical about the federal government, and is against gun regulations, so could back Johnson in November.

Note that the above listing adds up to 8 potential states that could support Johnson by plurality, with six being Mountain West states (including Alaska) and two being New England states. Their electoral vote adds up to 32, enough to decide which of the other candidates win the election, or enough to prevent either Donald Trump or Hillary Clinton from winning an outright victory on November 8. They are all small populated rural states, but they could be the balancing act, and decide who will be President.

And in theory, if neither major party candidate wins 270 electoral votes, the election would be thrown to the House of Representatives for the first time since 1824. In a Republican controlled House, Gary Johnson, in theory, could be elected President with the lowest percentage of popular votes in American history, far less than John Quincy Adams’ 30.9 percent in 1824 or Abraham Lincoln’s 39.8 percent of the vote in 1860.

So at least, there is a long range possibility that on January 20, 2017, we could have our third President Johnson, after Andrew Johnson in 1865 and Lyndon B. Johnson in 1963. And we would have a Libertarian President, the first third party candidate in history to be elected President, albeit by the House of Representatives.

But at the same time, under the 12th Amendment to the Constitution, either Mike Pence or Tim Kaine would become Vice President, as only the top two candidates for the Vice Presidency can be considered by the Senate, although the top three candidates can be considered by the House of Representatives for President. Since the Senate is majority Republican, that would likely make Mike Pence Vice President to serve with Libertarian Gary Johnson as President, which would make for a very interesting and weird situation, never having occurred before in American history.

Such an eventuality would also mean that, based on the 2015 Census population estimate, 8 states that together had about 11.5 million population, out of a total population of 321 million, or about 3.64 percent of the total national population, would have given us our 45th President of the United States. Additionally, in those 8 states in the 2012 Presidential election, about 3.75 percent of the total popular vote or 4.9 million popular votes was recorded, out of a total national popular vote of about 129 million.

Would we want such a small percentage of the population deciding our next President? Hopefully, this scenario will not happen.