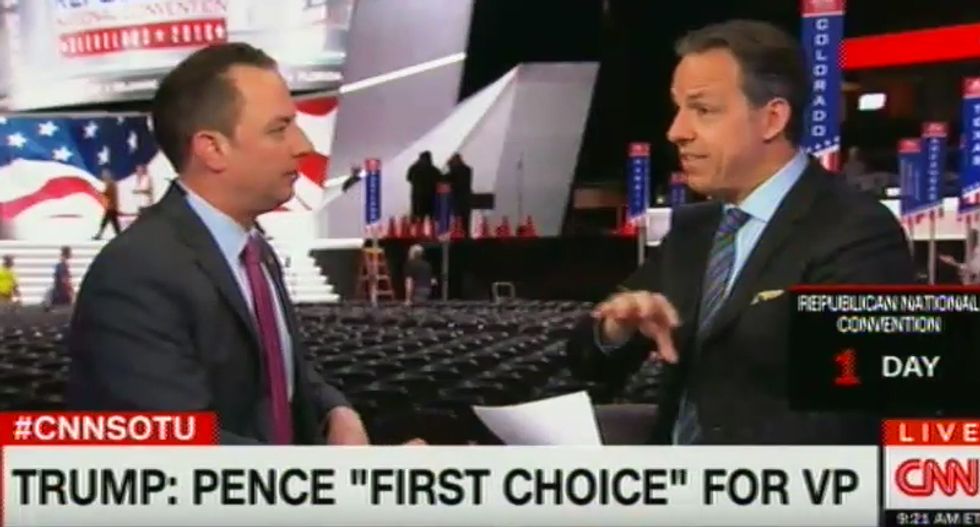 Appearing on CNN's State of The Union, Republican National Committee chair Reince Priebus set out to put a positive spin on the selection of Mike Pence as Donald Trump's running mate only to end up, once again, attempting to defend Trump's plan to ban Muslims from entering the US.

CNN host Jake Tapper noted Pence's tweet after Trump announced his proposed Muslim ban, where the the Indiana Governor wrote: "Calls to ban Muslims from entering the U.S. are offensive and unconstitutional."

"Help me understand what's going to happen here," Tapper began. "Is there going to be a total and complete ban on Muslims coming into the United States until we can 'figure out what the hell is going on.' Or is there not going to be one?"

"No, uh, what Donald Trump has... " Priebus began before fumbling. "If you've seen the last few weeks, the position that he's put on the table, the position papers on his website, what he's been talking about is a temporary ban on immigration from countries that harbor and train terrorists until me get a better vetting system."

"Sure," Tapper parried, "That proposal that you just enumerated is different than what he said in December. And he has said that he has not backed off or changed his position."

"No, no. He has pivoted to this position--" Priebus began before an exasperated Tapper cut him off.

"It's what I've seen him say in person," Priebus whined.

"I agree that it sounds like a pivot, or a change, but he says he hasn't changed," Tapper shot back.

"No, he has said that he's changed," Priebus replied. "He has put the position on the table. And that is his position"