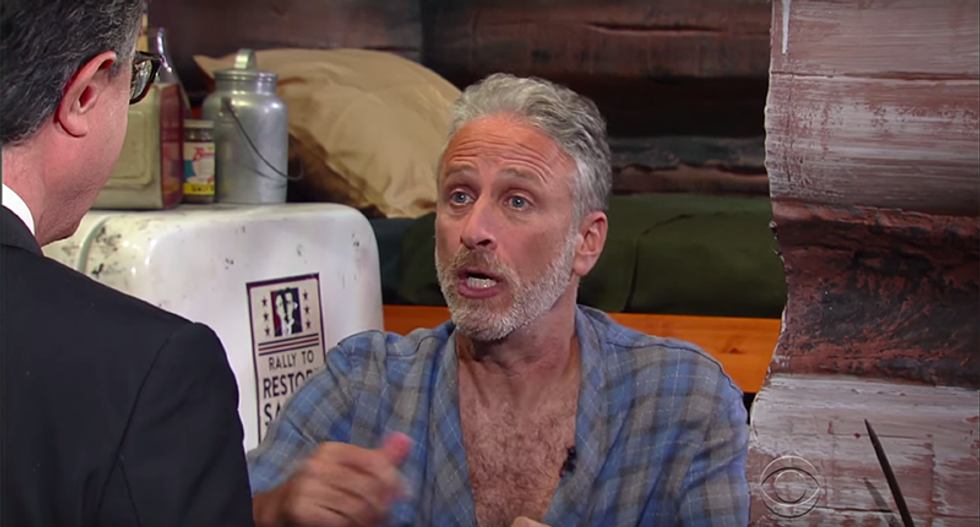 Stephen Colbert tromped out to a cabin in the woods to find Jon Stewart on last night's "Late Show," in hopes that the former "Daily Show" host could explain how Donald Trump came to pass.

Putting aside his chi kombucha, Colbert invited his friend in for some kale jerky, but desperately begged him to forego his beard care to explain how Donald Trump became the Republican nominee for president.

Stewart played dumb, pretending he didn't know Trump was the nominee and after a hilarious spit-take wondered how the hell it happened. "The guy from 'The Apprentice?' The guy who did a McDonald's commercial with Grimace? The guy who filed for bankruptcy in 1991?" Stewart asked.

"Mike Tyson's business advisor? That guy?" Stewart asked. "The guy whose eyes look like tiny versions of his mouth."

"The guy who looks like an angry creamsicle," Colbert clarified.

"A loose-fitting one at that!" Colbert joked.

"The guy who wrote, and I quote, 'Oftentimes, when I was sleeping with one of the top women of the world, I would say to myself, 'can you believe what I am getting.' That guy?" Stewart asked.

"Yes! The same guy who said, and I quote, 'I have black guys counting my money. I hate it. The only guys I want counting my money are short guys that wear yamakas all day,'" Colbert clarified. "So you can see why I'm here."

Stewart instead brought out Republican Colbert, who was reprised earlier in the show, but even that character couldn’t believe Trump was the nominee.