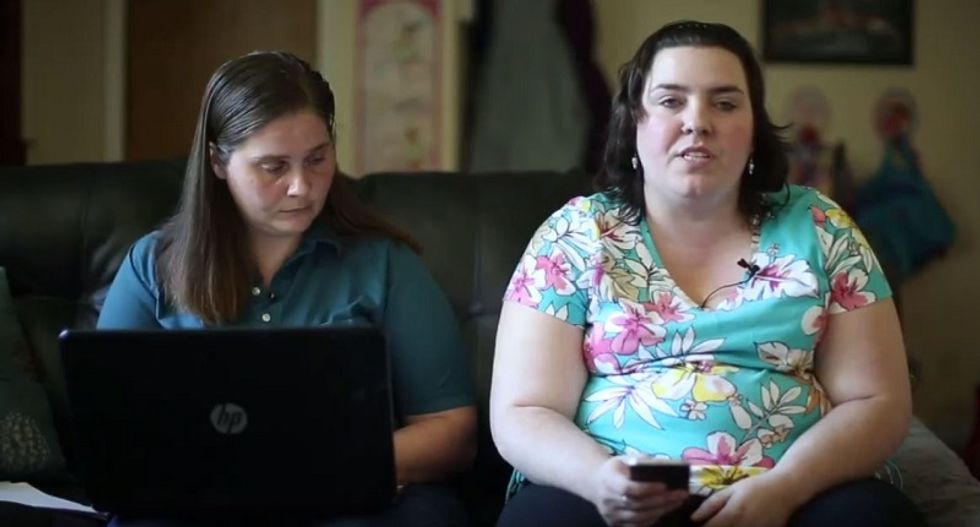 Three years ago, Rachel and Laurel Bowman-Cryer thought they were about to do something very mundane in the course of planning for one of life's milestones -- buy a wedding cake.

But as it would now famously turn out, the lesbian couple became faces of the marriage equality movement, culminating last year in the Supreme Court's Obergefell ruling, which legalized same-sex marriage in all 50 states.

The Oregon couple approached Sweet Cakes by Melissa in 2013 seeking a wedding cake, but were refused service. The bakers, Aaron and Melissa Klein, said they refused to do so due to their Christian religion, which propelled them to something of a martyr status in the conservative religious community.

But the Bowman-Cryers just wanted a cake, according to the Oregonian. Instead, three years later, they are still bombarded with death threats and hate-filled messages and haven't yet been able to cash out on the fine the cake makers owed them because it's hung up in a government account.

Oregonian reporter Casey Parks describes waiting with the couple for their daughter to get off a school bus and seeing Rachel's phone chirp with an alert of a new message.

"I am buying up my ammo right now you filthy, ugly, disgusting, fat, stupid, cruel, anti-Christian piece of liberal scum," Rachel read aloud. "I am getting ready for the war so I hope you have a good hiding place, you sick, disgusting, miserable, piece of degenerate lesbian scum."

Another read, "Filthy dirt bag. You are ruining this country, and we will not let you do it."

The story serves as a harrowing reminder of how a private couple got launched into the nasty culture war fires that burned across the 2016 political landscape.

After the ruling in their favor, Rachel and Laurel tried to hide, staying in their homes, turning down interviews, quitting their jobs -- even not answering their phone, the Oregonian reports. But the case would not die down, because the bakers decided to go nuclear.

The Kleins appealed the fine, hired President George H.W. Bush's White House lawyer and toured the country with then-Republican presidential candidate Ted Cruz as the face of so-called religious persecution against Christians by the LGBT community.

But the Bowman-Cryers agreed to talk to the Oregonian and break their silence about their experience in the days that followed, recalling how they had fantasized about a white chocolate-topped raspberry cake made by the bakers -- the same one Rachel's mom had -- and the heartbreaking way that fantasy fell apart.

When they went for the tasting, the couple says Aaron Klein met them with a phrase no bride-to-be and her mother want to hear. "He said, 'I'm sorry, ma'am. But your children are an abomination.'"

When they complained with the state, Klein posted it on his Facebook account, with the phrase, "This is what happens when you tell gay people you won't do their 'wedding' cake." His post included the women's personal information, including their address and phone number.

To this day, the women have been receiving messages like the one they got after the first day of filing the complaint: "Can't wait to see you die and go to hell one day."

But now the couple is speaking out, despite their struggle and in the face of ever-present messages of hatred, in hopes of teaching their two young daughters to be strong when faced with adversity.

"Fear is no way to live," Laurel told the Oregonian. "We need to retake our name. Our lives."

Watch the couple read their hate mail, in a video posted by the Oregonian, here:

From vaccines to AI: New weapons in the fight against cancer

Could humanity finally be gaining the upper hand in our age-old fight against cancer?