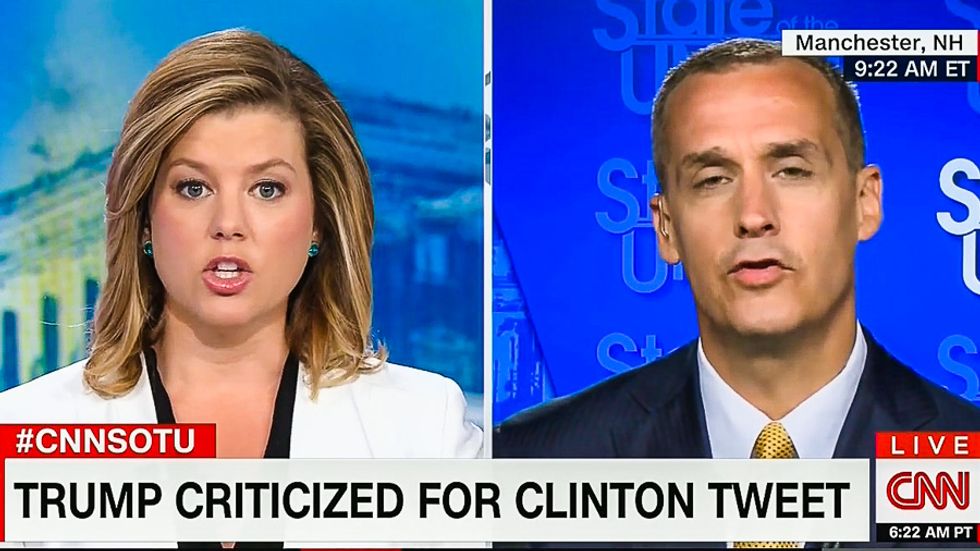 CNN contributor Corey Lewandowski accused critics of Donald Trump of "political correctness run amuck" after the presumptive GOP nominee was forced to retract a tweet that used the Star of David to attack Hillary Clinton.

Over the weekend, Trump posted an image on Twitter that showed Hillary Clinton in front of piles of money. A Star of David included with the image read: "Most corrupt candidate ever!"

Trump eventually deleted the tweet and posted a new image, replacing the Star of David with a circle.

According to Mic, the original image had appeared on a neo-Nazi white supremacist website before Trump used it in his tweet.

"Look, a tweet is a simple tweet," Lewandowski scoffed. "And the bottom line is you can read into things that aren't there. You know, this is a simple star."

"It's the same star that sheriff's departments across the country use all over the place to represent law enforcement," Lewandowski shot back. "To read into something that isn't there is, you know what, again, that is the mainstream media trying to attack Donald Trump for something that really isn't there."

"So, they put a new tweet up with a circle," he continued. "Let's look at the message is that Hillary Clinton is corrupt."

"If there's nothing there, Corey, then why did they pull it?" the CNN host wondered.

"The bottom line is this is political correctness run amuck," Lewandowski declared. "If this was a star next to Hillary Clinton that didn't have the cash behind it, no one would be questioning this. This is the mainstream media trying to read into something."

Watch the video below from CNN's State of the Union, broadcast July 3, 2016.