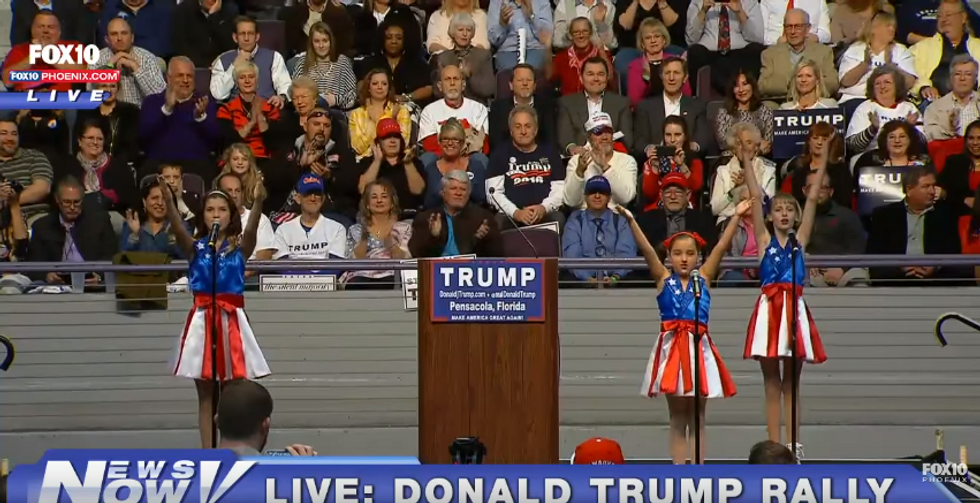 The USA Freedom Kids sing at a Trump rally in Florida (Screen cap).

Remember the Freedom Kids, the troupe of child singers who sang creepily authoritarian tributes to Donald Trump during his rallies?

The Washington Post reports that Jeff Popkick, who is the father of one of the Freedom kids, said that he's not trying to attack the Trump campaign but is instead trying to do what's right for both himself and the "Freedom Kids" girls.

Here's what happened: Popkick talked with former campaign manager Corey Lewandowski about having the kids perform at two Trump rallies in Florida. He asked the campaign if it could pay them $2,500 for the performance, but the campaign countered by offering a table where Popkick could sell the girls' CDs to attendees.

Popkick took the deal but quickly discovered that the Trump campaign never bothered setting up a table for them -- and the result was "complete chaos."

"Popick, believing that he was owed some alternate compensation, tried to contact the campaign afterward, without luck," the Post writes. "In addition to costs spent on promotional materials for the non-existent table, Popick says, he also lost several promotional opportunities due to confusion over his relationship with the campaign."

Given Trump's long history of stiffing contractors, this shouldn't surprise anyone.

And that's not all -- the Trump campaign also found ways to hurt Popkick financially by having him come to events without even covering his travel expenses that still haven't been paid back despite repeated pleas with them.

Check out the Post's full report on the Trump campaign short changing the Freedom Kids at this link.