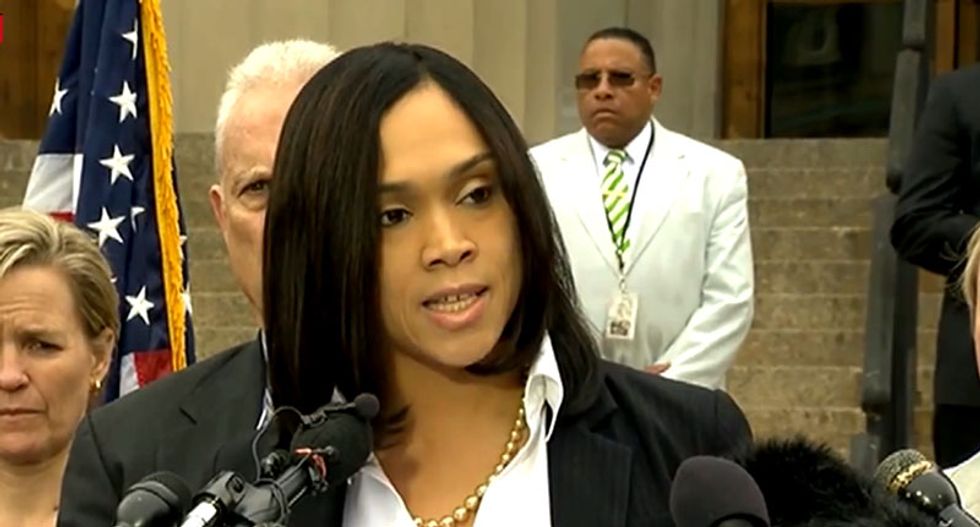 Following the announcement that all charges have been dropped against police officers complicit in the death of Freddie Gray in 2015, State's Attorney Marilyn Mosby tore into the process where police were allowed to investigate their peers and called for reform.

"We do not believe that Freddie Gray killed himself. We stand by the medical examiner's determination that Freddie Gray's death was a homicide," she stated at a news conference in West Baltimore.  "However, after much thought and prayer, it has become clear to me that -- without being able to work with an independent investigatory agency from the very start, without having a say in the election of whether our cases proceed in front of a judge or a jury, without communal oversight of policing in this community, without real, substantive reforms to the current criminal justice system -- we could try this case 100 times, and cases just like it, and we would still end up with the same result."

On Wednesday, Mosby's office announced that it would drop all remaining charges against the three Baltimore Police Department officers still awaiting trial over Freddie Gray's death.

As Raw Story reported earlier Wednesday, the state's attorney's office announcement is unsurprising since most legal experts thought the prosecutor's best case against the officers involved in Gray's April 2015 death hinged on Officer Cesar Goodson, the driver of the van in which Gray was fatally injured, and who failed to make sure the 25-year-old African-American man was secured before starting the drive to the police station. Raw Story noted Goodson was acquitted of all charges in June.

Mosby's prosecution team had tried to prove that the six BPD officers on trial had subjected Gray to a "rough ride" -- intentionally neglecting to secure his seat belt while he was handcuffed in the back of their police van in an effort to harm him while the van drove to the station. However, the state's attorney and her team were unable to provide conclusive evidence that the cops on trial did indeed intend to hurt Gray.

As The Baltimore Sun noted, Mosby's announcement means that the state's attorney will not secure any convictions in the case in general, after more than a year of trying to hold someone in the BPD criminally responsible for Freddie Gray's death.

Due to Circuit Judge Barry G. Williams' gag order preventing parties involved in the case from speaking publicly, Mosby was unable to talk to the press about the obstacles her office faced over the past 14 months. But now that the trial is officially over and the gag order lifted, the chief prosecutor did not mince words when she accused members of the BPD of escalating the "systemic and inherent complications" of trying police officers for crimes.

"Unlike with other cases, where prosecutors work closely with the police to investigate what actually occurred, what we realized very early on in this case was that police investigating police, whether their friends or merely there colleagues, was problematic," Mosby said. "There was a reluctance and an obvious bias that was consistently exemplified, not by the entire Baltimore Police Department, but by individuals within the Baltimore Police Department at every stage of the investigation, which became blatantly apparent in the subsequent trials."

Mosby's comments did not come without a reply from the BPD. According to The New York Times, the head of the police union said the attorney's claims that BPD officers helped to undermine the prosecution's investigation into their fellow cops' alleged misconduct were "outrageous."

Even Donald Trump weighed in on the outcome of the trial. In a video posted by The Guardian on Wednesday, the GOP presidential candidate told reporters traveling with him that Mosby is "disgraceful" and that she should "prosecute herself."

But while the Baltimore state's attorney noted that "as a mother," her decision not to pursue charges against the officers in the Gray trial is "agonizing," she will continue to fight for equality in the criminal justice system.

"This system is in need of reform, and when it comes to police accountability, and as long as I am the chief prosecutor for this city, I vow to you that my office and I will fight," Mosby said. "We will fight for a fair and equitable justice system for all, so that whatever happened to Freddie Gray never happens to another person in this community again."