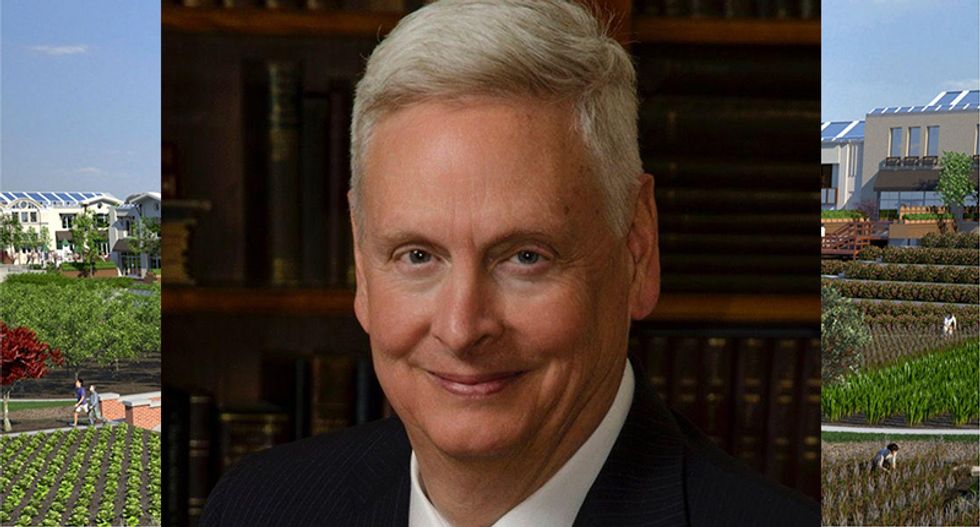 Wealthy Mormon tycoon David Hall is buying up farmland all over Vermont in efforts to bring his dream of a sustainable high-density community of Mormons to life. It won't be a cult, however.

According to Bloomberg, the whole project became known when local librarian Nicole Antal discovered all of the land around her being purchased by the same company owned by Hall. He isn't just partial to Vermont, Hall hopes to build the same type of communities all over the world. When Antal found NewVistas with "architectural models with fake people walking around," she wasn't sure what to think.

Ultimately she reached out to Hall to confront him about what he wanted to do, not just to her town, but to her own back yard. He asked to speak to her about the project via telephone and blew her mind with his 20,000-person community that would cover four small towns in Vermont.

His blueprints were crafted to emulate the so-called Plat of the City of Zion, which was part of Mormon prophet Joseph Smith's vision from 1833. Hall confessed he had more than 150 engineers working on the project. "All of the sudden it seemed like, oh my God, this is going to happen tomorrow," she said.

She posted a blog about it on Daily UV and Vermonters went nuts, ready for a war against Hall with campaigns like StopNewVistas.org. Hall flew out from Utah to meet with them and try to explain he wasn't about to pave paradise and put up a parking lot. Rather, he'll erect townhomes where people can rock the magic underwear for Jesus until the end times come.

While Hall might have the best of intentions for building a sustainable lifestyle, the money for NewVistas comes from Novatek, a fossil fuel drilling equipment company he had for over 40 years before selling it last year. Thus far he's spent $100 million on this project and expects to drop in $150 million more.

“Joseph Smith was just the wildest guy out there,” he said in an interview. “Lots of things he did were stupid, but in my view, he was a sage or a seer and didn’t even understand what came to him.”

The Old Testament tells of a city that was built so perfectly that God flew it away to heaven. Smith was studying the story and designed something similar with two friends while struck with the holy spirit. Hall found the document in the 1980s and since has sought to build it.

“When this square is thus laid off and supplied, lay off another in the same way, and so fill up the world in these last days, and let every man live in the city, for this is the city of Zion,” the passage reads.

Each person will get 200-square feet of living space in pods and utilities will be sustainable solar energy and water collection. Everyone also gets a Roomba-sized robot that rearranges your tiny-house furniture for you. The builders developed a similar property in Manhattan with 55 units, sans robot.

The plan sounds amazing for those who want to develop a smaller carbon footprint and live as much off the grid as possible. There's just one problem: The local government will be run by a board and hierarchies of leaders with strong Mormon family values.

“Each [multi-family] house has house captains, which are a team of one man and one woman,” Hall’s documents outline. “These are a selected married couple, with each providing leadership for and dealing directly with issues related to their gender.”

Though Hall explains he isn't opposed to the progressive idea that LGBT people and women should also be allowed to hold leadership positions. Those who buy will be required to invest their entire livelihood and be employed inside or outside the community or by NewVisa's corporations. Those who start up small businesses will be required to surrender their rights to their own intellectual property to the corporation.

Those in Vermont don't like the idea of a religious leader coming in and building a Mormon family values community. “We’re really not that interested in what religious figures 200 years ago thought about urban development,” says John Echeverria, a professor at the Vermont Law School. “I think he can permit us to be skeptical about whether Joseph Smith, 200 years ago, came up with a solution for our environmental problems.”

“Just to put it in perspective, this 20,000-person settlement is going to be bigger than our state capital,” says Kyle Milaschewski, a systems engineer at a crisis-logistics firm who lives in Sharon. He explained that growth like what Hall has planned would decimate the government structure. Vermonters would no longer have power over their own state, it would be in the hands of this new Mormon family values community. One dairy farmer even described it as a "nightmare."

Antal feels bad because Hall seems like such a nice person and his heart is in the right place, but what he wants scares her. “It’s like, we need big ideas, we need new ways of living that really address climate change. Then this comes, and I’m like, ‘No.’"

US President Joe Biden will seek to restore bonds of trust at NATO's first post-Trump summit on Monday, as leaders push to revitalise the alliance despite differences over dangers ahead.

The allies will agree a statement stressing common ground on securing their withdrawal from Afghanistan, joint responses to cyber attacks and relations with a rising China.

Sen. Ron Johnson (R-WI) tripled down on his assertion that the attack on the U.S. Capitol wasn't all that bad or dangerous.

Johnson, who didn't encounter any attackers on Jan. 6 and apparently hasn't viewed the closed-circuit camera video showing what happened that day. According to Johnson, he can tell it wasn't an "armed insurrection" because people were walking within the ropes.