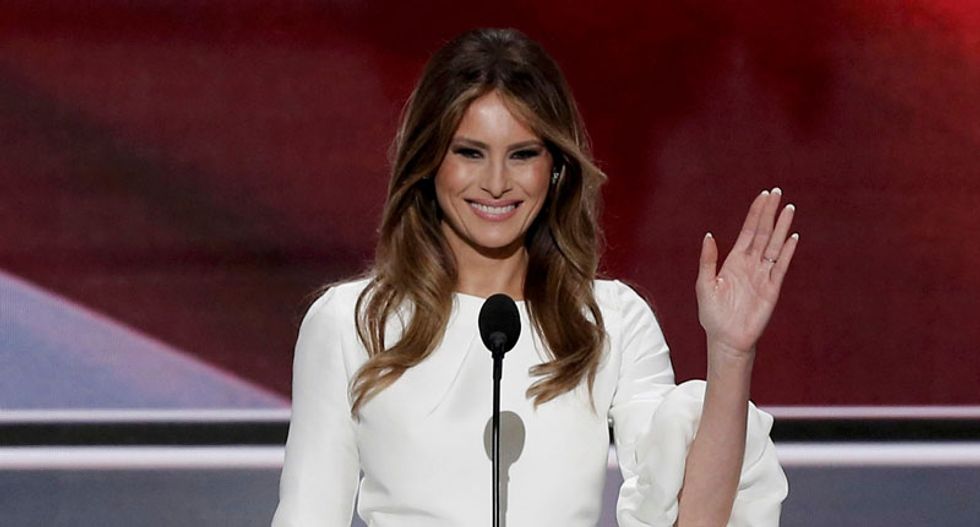 Similarities between the speech delivered by Donald Trump’s wife, Melania, and remarks by first lady Michelle Obama in 2008 stole the spotlight at the Republican convention on Tuesday, a day Trump’s campaign had hoped to devote to the U.S. economy.

House of Representatives Speaker Paul Ryan, the top U.S. elected Republican, was to formally put Trump's name forward later on Tuesday to be the party's presidential nominee for the Nov. 8 election.

On Monday, Trump's backers faced down a revolt from Republican delegates opposed to him. Then the campaign ran into unexpected controversy over what should have been a routinely feel-good part of the first day of the convention in Cleveland - Melania Trump's address in support of her husband.

A Slovenian-born jewelry designer and former model, Melania Trump delivered her testimonial after being introduced by Trump, who made a grand entrance dramatic, silhouetted against a white background.

"I have been with Donald for 18 years and I have been aware of his love for this country since we first met," the aspiring first lady told the convention, reading from a teleprompter. "He's tough when he has to be, but he's also kind and fair and caring."

But a small part of her speech quickly captured all the attention. Referring to the values held by her family, it was strikingly similar to a section of Michelle Obama's speech to the Democratic convention in 2008 in support of then presidential candidate Barack Obama. A Trump campaign official suggested the similarity was the result of an error by her speech writers.

"In writing her beautiful speech, Melania's team of writers took notes on her life's inspirations, and in some instances included fragments that reflected her own thinking," Jason Miller, Trump's senior communications advisor, said in a statement.

Trump himself made no mention of the issue in a Twitter post early on Tuesday, saying simply: "It was truly an honor to introduce my wife, Melania Trump last night. Her speech and demeanor were absolutely incredible. Very proud!"

Trump, a New York businessman, has never held elective office and has been a controversial candidate, struggling to unite Republicans around his White House bid despite seeing off 16 rivals to win the primary nominating process.

On NBC's Today show, Trump ally Chris Christie, the New Jersey governor, was asked if as a former prosecutor he could make a case for plagiarism from Melania Trump’s speech.

“No, not when 93 percent of the speech is completely different from Michelle Obama’s speech, and they express common thoughts," Christie replied. "I think after tonight we won’t be talking about this, we’ll move on to whatever … comes up tonight," he said.

Despite his lack of political experience, Trump touts his business record as a real estate developer and - running counter to Republican free trade orthodoxy - has proposed some protectionist trade policies aimed at preventing job outsourcing.

Christie, Ryan, Senate Majority Leader Mitch McConnell were part of the lineup of speakers on Tuesday, along with Trump's son, Donald Trump Jr., daughter Tiffany and a former Trump rival for the presidency, Ben Carson.

It will be Christie's first major public appearance since Trump chose Indiana Governor Mike Pence as his vice presidential running mate last week, disappointing Christie who had been on the short-list for the job.

Both Ryan and McConnell need Trump to do well in the November election as they seek to preserve Republican majorities in the U.S. House and Senate.

Trump is pitted against Hillary Clinton, who will be formally anointed the Democratic candidate at the party's convention in Philadelphia next week. The former secretary of state leads most opinion polls.

Part of the goal of the Republican convention is to portray Trump in the most favorable light possible, softening the image of a candidate whose anti-immigrant rhetoric has factored heavily in Americans' views of him.