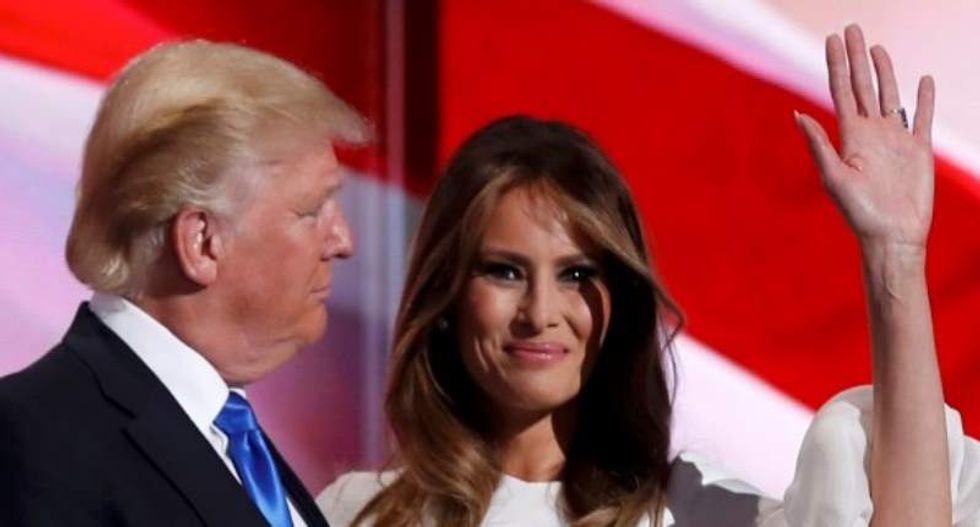 Donald Trump's wife, Melania, in her first major political speech on Monday, portrayed her husband as a talented, compassionate and unrelenting leader who would unify rather than divide the country if elected to the White House.

The Slovenian-born jewelry designer and former model spoke to a cheering crowd at the Republican National Convention in Cleveland after a one-minute introduction from Trump.

The presumptive Republican nominee made a dramatic entrance, silhouetted in a white background and to the accompaniment of Queen's 1977 rock anthem "We Are the Champions."

"I have been with Donald for 18 years and I have been aware of his love for this country since we first met," the aspiring first lady told the convention. "He’s tough when he has to be, but he's also kind and fair and caring."

"Donald wants prosperity for all Americans," she said, reading from a teleprompter, as people applauded.

Her comments were an attempt to soften the image of the New York businessman-turned-politician, who has been accused of bigotry and callousness for his calls to suspend Muslim immigration and deport millions of undocumented immigrants if elected. He has also been criticized for insults directed at women, political opponents and journalists.

Trump's Democratic rival, Hillary Clinton, accuses Trump, 70, of lacking the experience and temperament needed to work in the Oval Office. On Monday, Clinton, 68, used an address to a largely black audience to cast Trump as someone who would divide the country along racial, ethnic and religious lines.

The convention's opening night featured a string of emotional speakers attacking Clinton's record as secretary of state under President Barack Obama, many arguing she had made Americans vulnerable to Islamist militancy.

"I blame Hillary Clinton personally for the death of my son," said Pat Smith, the mother of an information management officer who was among the four Americans killed in an attack on a U.S. mission in Benghazi, Libya, in 2012.

Former New York Mayor Rudy Giuliani, whose administration has been credited with sharply reducing crime in the city during the 1990s and who oversaw the city's response to the Sept. 11, 2001, attacks that destroyed the World Trade Center and killed almost 3,000 people, gave a highly charged speech slamming Clinton and making the case for Trump.

"What I did for New York, Donald Trump will do for America!" he said.