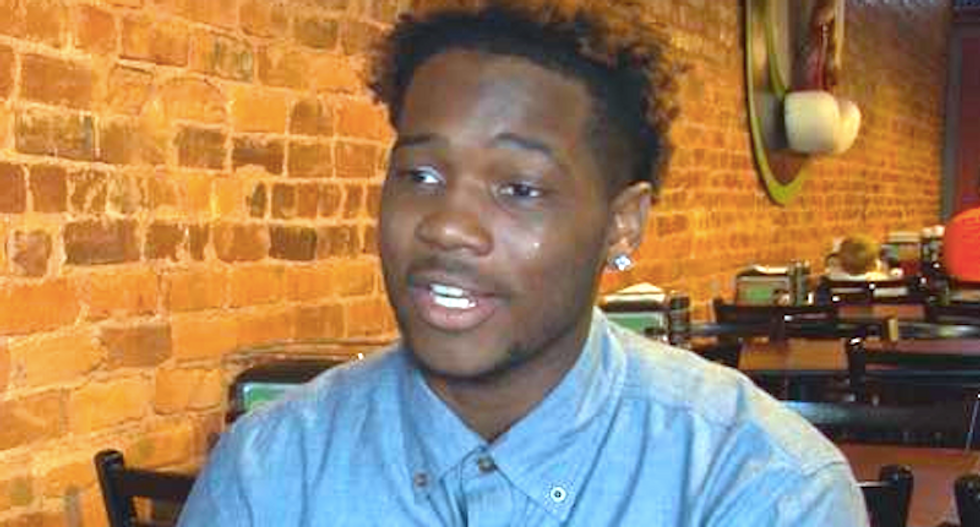 When police officers were called to investigate a tent set up outside a Georgia college, they didn't expect to find inspiration.

The officers were called July 9 to a campsite near a Gordon State College parking lot, where they found a 19-year-old homeless student staying in a tent hidden in some bushes, reported The Herald-Gazette.

The officers ordered him out of his tent with his hands up, but they listened to his story instead of writing a ticket for trespassing.

Fredrick Barley had ridden six hours -- and more than 50 miles -- on his younger brother's 20-inch bicycle and arrived about a month early for his second year as a biology major, with nothing but his tent, a duffle bag, a box of cereal and two gallons of water.

The student, who hopes to go on to medical school, wanted to make sure he had enough time to find a job before classes began, and he spent his days riding his too-small bike to fill out applications at local businesses.

“(The officer) was so understanding, and he said, ‘I definitely I applaud you for doing this. We can’t allow you to stay here, but I have somewhere you can stay,’” Barley said. “The stuff that’s happening with police officers, I am black and he didn’t care what color I was. He just helped me, and that meant a lot."

Barley had been camping for three days before officers found him -- and they were immediately impressed by his character.

“After meeting Fred, I could tell he was a good kid,” said Officer Dicky Carreker, of Barnesville police. “He was a young kid who had been dealt a bad hand and was trying to make the best out of it. All he wanted was a job.”

Carreker and Officer Maria Gebelein gave the student all the money they had in their wallets and took him to a nearby motel, where they each paid for one night's stay.

"We could tell he was serious about his education,” Gebelein said. “We helped him because we felt it was the right thing to do.”

Carreker's wife posted the story on Facebook, and community members rallied around the student.

Local residents bought gift cards, food and clothing for Barley, and they bought him an adult-sized mountain bike and are working to get him a car.

“I was not expecting any of this support and am in awe of how this community has come together to help me,” Barley said. “I was just trying to go to school, find a job and make it on my own. Now it seems as though I am part of a new community and have a new family.”

Debbie Adamson, the owner of DB's Pizzeria, said she recognized Barley's genuine heart and hired him as a dishwasher.

“I created a position for him before he walked in my door," she said. "I didn’t know his name, I didn’t know the color of his skin -- I didn’t care. I’ve been there, so I guess I had a soft spot for anyone who is that determined to succeed in life."

The owner of the Sun Inn offered a free room to Barley until the dormitories open, and the college agreed to let him move in early -- on Monday.

Other community members have set up a Facebook group, Success For Fred, to solicit donations and other help for Barley, including an Amazon wish list, and a GoFundMe page has raised nearly $35,000 after his story aired on local media.

Barley said he's grateful for the support -- and the trust -- his new community has placed in him.

“The most shocking part is so many people coming to help a stranger, because honestly in today’s society this sounds like a scam,” Barley said. "Some of the gifts aren’t as important as the friends I’ve made. More important than everything -- the clothes, the shoes -- the relationships mean so much more to me."

One of his high school friends saw Barley's story on TV news, and she wasn't surprised he'd made so many new friends.

"Watching this broke my heart but it's like you to ask for the job not money and to see all these people supporting you and loving you makes me so happy," said former classmate Isabel Mancilla. "I'm so proud of you and you know I'll be right there in the crowd when you graduate."

Carreker said he's been overwhelmed by the reaction to Barley's story and his own good deed.

“It’s just beautiful how our community has come together to help someone in need,” Carreker concluded. “Barnesville is the epitome of a small town with a big heart.”