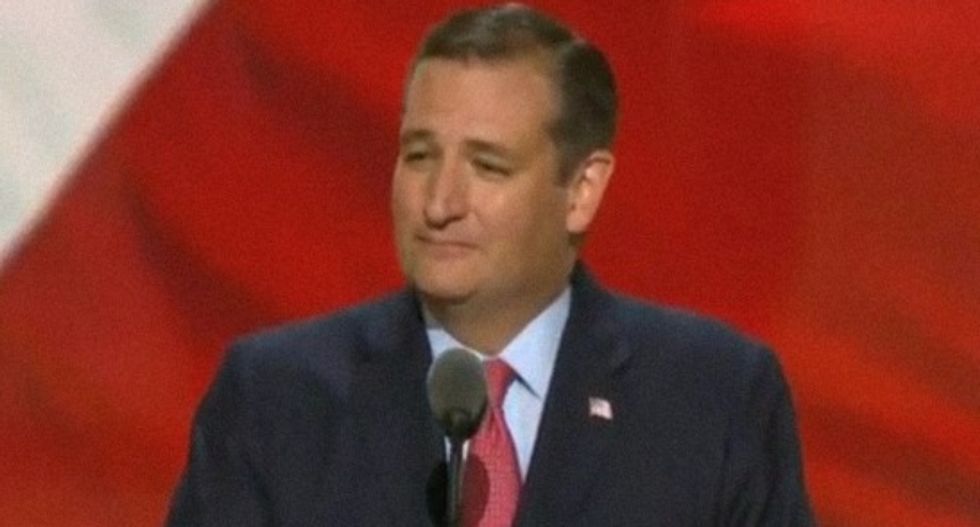 Sen. Ted Cruz (R-TX) congratulated Donald Trump -- and backed his immimgration policy -- during his appearance at the Republican National Convention on Wednesday.

"We deserve an immigration system that puts America first -- and yes, builds a wall to keep America safe," Cruz said. However, the Tea Party lawmaker only mentioned Trump by name once -- much less than Democrats Barack Obama and Hillary Clinton, and as many times as NBA star LeBron James.

Seemingly realizing that Cruz would not endorse the party's presumptive presidential nominee, the end of his speech was greeted with boos. Cruz also asked Republicans to vote with their conscience, a phrase often used by members of the party's "Never Trump" faction, which sought to put his nomination to a roll-call vote earlier in the week.

"He protested the very protesters who mocked him," Cruz said. He did not mention that the suspect, Micah Xavier Johnson, had no connection to the movement, or that the relationship between local police and the movement was positive, to the point that, as Slate reported, the department posted pictures online showing officers standing aside a man holding a sign saying, "No justice, no peace."

Cruz also boasted about the role of the Republican Party in fighting slavery and passing the Civil Rights Act. He did not mention that the party is also responsible for implementing Lee Atwater's "Southern Strategy," or its current pursuit of voting guidelines that disenfranchise elderly voters of color.

Update, 10:22 p.m. EST: CNN reported that Cruz's wife, Heidi, was escorted from the event after hecklers chanted "Goldman Sachs" at her.

Health authorities in North America and Europe have detected dozens of suspected or confirmed cases of monkeypox since early May, sparking concern the disease endemic in parts of Africa is spreading.

Canada was the latest country to report it was investigating more than a dozen suspected cases of monkeypox, after Spain and Portugal detected more than 40 possible and verified cases.

Johnny Depp grabbed his then-wife Amber Heard by the hair and repeatedly struck her in the face during a heated argument about a month after their marriage, her sister said Wednesday.

Heard also punched Depp during the March 2015 fight at their Los Angeles penthouse, Whitney Henriquez testified at the high-profile defamation case between the celebrity couple.

Trump picked Dr. Oz because he's 'perfect prey' to be made into a slavish loyalist: MSNBC's Mika

The "Morning Joe" host was off Thursday, the day after he made the quickly realized prediction, but other panelists noted that Scarborough and co-host Willie Geist correctly speculated that Trump would lie about the too-close-to-call Pennsylvania GOP Senate primary as the votes were still being counted.