Sanders and other Democratic stars try to unite party: 'Hillary Clinton will make an outstanding president' 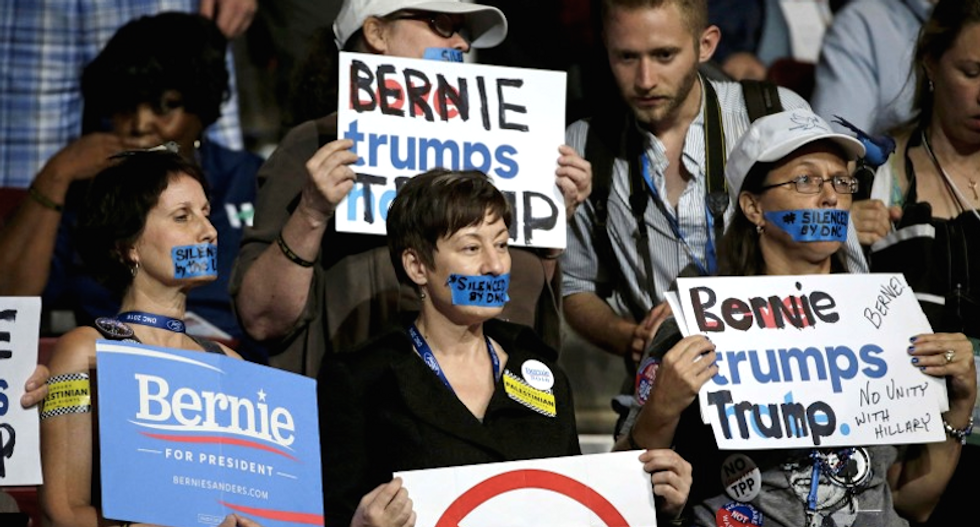 The Democratic Party's deep divisions were on full display on a raucous first day of its convention, with Bernie Sanders portraying Hillary Clinton as a fellow soldier in his fight for economic equality while his supporters booed the mere mention of her name.

"Based on her ideas and her leadership, Hillary Clinton must become the next president of the United States," Sanders said. "Hillary Clinton will make an outstanding president and I am proud to stand with her here tonight."

The furor in Philadelphia was a setback to Democrats' hopes their convention would be a smoothly run show of party unity in contrast to the volatile campaign of Trump.

It was also a bitter reminder of the bruising months-long primary battle between Sanders, 74, a U.S. senator from Vermont, and Clinton, 68, a former secretary of state, who this week will become the first woman nominated for president by a major U.S. political party.

Michelle Obama linked the historic nature of Clinton's campaign with her husband's own role as the first black U.S. president.

"I wake up every morning in a house that was built by slaves, and I watch my daughters, two beautiful and intelligent black young women, playing with their dogs on the White House lawn," Obama said.

"And because of Hillary Clinton, my daughters and all our sons and daughters now take for granted that a woman can be president of the United States."

The tumult began before the convention opened, as Sanders drew jeers from his own delegates when he urged them to back the White House bid of his former rival, Clinton, and focus on defeating Trump in the Nov. 8 presidential election.

"We want Bernie!" they shouted in anger at both Clinton's victory in the race for the Democratic nomination and emails leaked on Friday suggesting the party leadership had tried to sabotage Sanders' insurgent campaign.

"Brothers and sisters, this is the real world that we live in," he said, adding: "Trump is a bully and a demagogue."

Members of the crowd screamed back: “So is Hillary.” "She stole the election!" someone else shouted.

Trump gloated at the Democrats' opening day disorder, and made a pitch for Sanders voters to turn to him.

"Sad to watch Bernie Sanders abandon his revolution. We welcome all voters who want to fix our rigged system and bring back our jobs," Trump said on Twitter.

In the opening hours of the convention, party officials struggled to carry out business as angry Sanders supporters roared their disapproval, drawing a deafening response from Clinton delegates.

"We're all Democrats and we need to act like it," U.S. Representative Marcia Fudge of Ohio, the convention's chairwoman, shouted over the uproar.

Sanders tried to head off the disruptions, sending an email to delegates as the convention opened urging them not to interrupt the proceedings.

"Our credibility as a movement will be damaged by booing, turning of backs, walking out or other similar displays. That's what the corporate media wants. That's what Donald Trump wants," Sanders said in the email.

Several speakers pleaded for peace between the Democratic factions. Comedian Sarah Silverman, a Sanders supporter, said she would support Clinton "with gusto" and admonished the Sanders fans.

"To the 'Bernie or Bust' people, you're being ridiculous," she said, drawing a roar from the crowd and another round of competing cheers between Clinton and Sanders supporters.

She and U.S. Senator Al Franken of Minnesota then introduced Paul Simon to sing his 1970 hit "Bridge Over Troubled Water."

Warren accused Trump of taking a me-first attitude and said the Republican convention had displayed his lack of ideas.

"Did you hear even one solid proposal from Trump for increasing incomes or improving your kids’ education or creating even one single good-paying job?" she said.

As the convention opened, the Democratic National Committee issued "a deep and sincere apology to Senator Sanders, his supporters, and the entire Democratic Party" for the email flap and said it would take action to ensure it never happens again.

Democratic National Committee Chairwoman Debbie Wasserman Schultz resigned effective at the end of the convention over the controversy. At a morning gathering of Florida delegates, Sanders supporters booed Wasserman Schultz, whom they accuse of trying to sabotage the campaign of the democratic socialist.

The emails exacerbated the distrust of Clinton among some Sanders supporters who view her as a Washington insider paying lip service to their goals of reining in Wall Street and eradicating income inequality.

But U.S. Senator Jeff Merkley of Oregon, the only senator to endorse Sanders during the party primaries, told the convention that supporters of the two former rivals had plenty in common.

While Sanders has endorsed Clinton, the former first lady faces a difficult task winning over his backers in the fight against Trump. The New York businessman pulled ahead in at least one opinion poll on Monday, after lagging Clinton in most national surveys for months.

A CNN/ORC opinion poll gave Trump a 48 percent to 45 percent lead over Clinton in a two-way presidential contest.

Trump was formally nominated for president at a chaotic Republican convention in Cleveland last week.