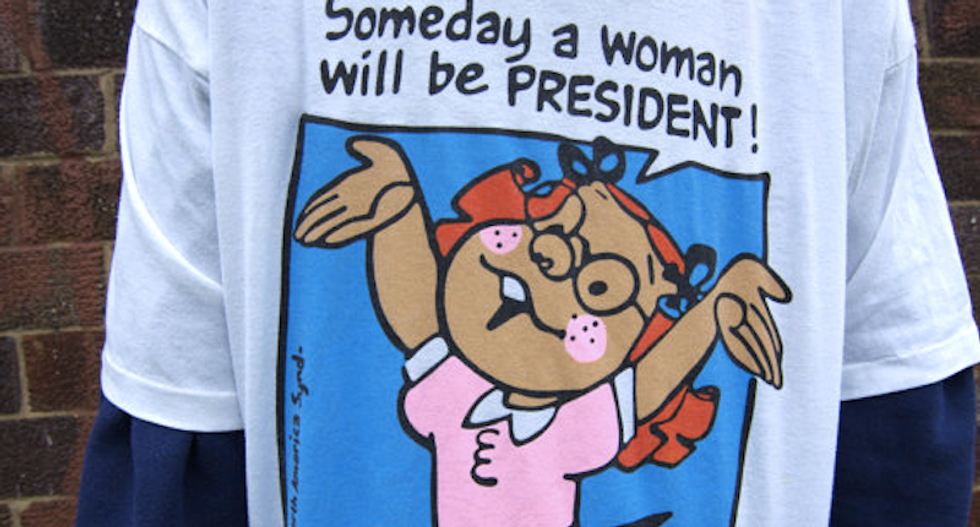 'Someday a woman will be president' T-shirt (Etsy)

Hillary Clinton became the first woman nominated for president by a major American political party, but just 21 years ago -- when she served as First Lady -- Wal-Mart wouldn't even sell T-shirts promoting the idea.

In August 1995, a Wal-Mart store in Florida sold T-shirts showing Margaret, a character in the comic strip "Dennis the Menace," proclaiming that “Someday a woman will be president.”

A customer spotted the T-shirts and complained, reported The Associated Press, and the store removed them.

“It was determined the T-shirt was offensive to some people and so the decision was made to pull it from the sales floor,” said Jane Bockholt, a spokeswoman for the company at the time.

The store, which was located in Miramar, had sold about two-thirds of its 204 shirts in about two weeks, and was about to order 100 more when the customer complained.

The designer of the T-shirt said a buyer for Wal-Mart's national office told her the Arkansas-based company would not carry her design nationwide because the message "goes against Wal-Mart's family values."

Ann Moliver Ruben, a psychologist who was then 70 years old, said the company had censored her message.

"Promoting females as leaders is still a very threatening concept in this country," Ruben said at the time.

Ruben bought the rights to use the character from King Features Inc, and planned to sell the shirts for $10 to $15 to women's groups in hopes of inspiring girls, but she approached Wal-Mart about spreading her message even wider.

Wal-Mart's decision sparked protests, and the company ordered 30,000 of Ruben's shirts in December 1995 to sell nationwide in its stores.

"Loud and clear, our customers told us it was a mistake to remove them," said Bockholt, the Wal-Mart spokeswoman. "It was just a cute T-shirt. It had nothing to do with politics."

Two decades later, Michelle Obama, the wife of the nation's first black president, told the Democratic National Convention that a woman president was no longer a controversial notion.

"Because of Hillary Clinton, my daughters and all our sons and daughters now take for granted that a woman can be president of the United States," Obama said.

In a statement, a Walmart spokesperson said: "Wow, it still pains us that we made this mistake 20 years ago. We’re proud of the fact that our country – and our company – has made so much progress in advancing women in the workplace, and in society."