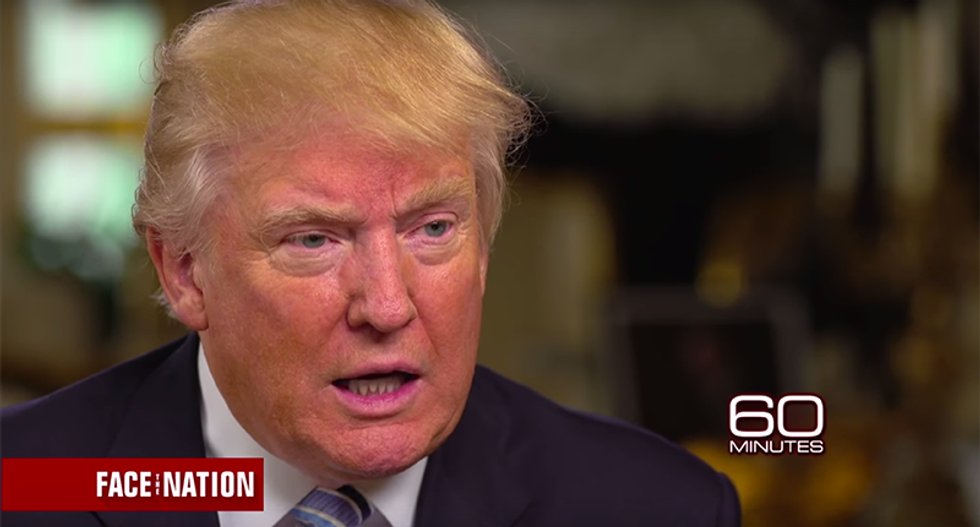 GOP presidential nominee Donald Trump is trying to have it both ways on his foreign policy plan. In a teaser of Mike Pence's "60 Minutes" interview that "Face the Nation" aired Sunday, Trump did little more than blame President Barack Obama and Democratic opponent Hillary Clinton for ISIS, and wouldn't convey what his plan for fighting the terrorist group is.

CBS reporter Leslie Stahl clarified Trump's use of the distinction of "this is war" and "declare war," asking the GOP nominee "When you say 'declare war,' do you want to send American troops in there? Is that what you mean?"

"We're going to declare war against ISIS. We have to wipe out ISIS," Trump said, refraining from committing ground troops to another foreign ground war, which is wildly unpopular with voters in both parties.

"I am going to have very few troops on the ground. We're going to have unbelievable intelligence, which we need; which, right now, we don't have. We don't have the people over there," he said. Trump's daily intelligence briefing likely does not include sensitive details about covert operations, according to an NPR report.

But when it comes to Trump's plan for the war against ISIS, he seems to be taking a similar approach to building his wall on the Mexico border: Let others do it.

"We're going to have surrounding states and, very importantly, get NATO involved because we support NATO far more than we should, frankly, because you have a lot of countries that aren't doing what they're supposed to be doing. We have to wipe out ISIS," Trump said.

This seems to be in keeping with what Trump's opponent Hillary Clinton has also said.

"A more effective coalition air campaign is necessary, but not sufficient, and we should be honest about the fact that to be successful, airstrikes will have to be combined with ground forces actually taking back more territory from ISIS," Clinton said in her November speech on foreign policy.

"Hillary Clinton invented ISIS with her stupid policies. She is responsible for ISIS. She led Barack Obama — because I don’t think he knew anything; I think he relied on her,” Trump explained. “As Bernie Sanders said, ‘Her judgment is so bad.’ She’s got bad judgment. She’s got bad instincts.”

Trump appears to be trying to have it both ways by blaming Clinton for "inventing ISIS" while also agreeing with her on the strategy.

"The larger issue here is declining American power in the world," Trump's new VP pick Mike Pence interrupted. "I truly do believe that history teaches that weakness arouses evil. And whether it be the horrific attack in France, the inspired attacks here in the United States, the instability in Turkey that led to a coup — I think that is all a result of a foreign policy of Hillary Clinton and Barack Obama that has led from behind and that has sent an inexact, unclear message, about American resolve."

Check out the full video below via Face the Nation: