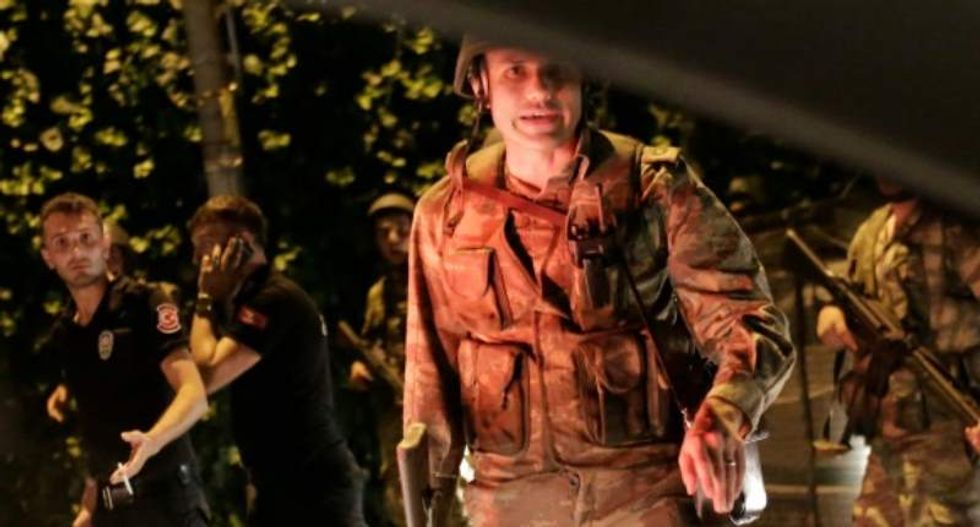 Turkish security officers detain Turkish police officers (in black) on July 15, 2016 in Istanbul, during a security shutdown of the Bosphorus Bridge. (AFP/Yasin Akgul)

Members of the Turkish military attempted to stage a coup d'etat, the Associated Press reported.

Prime Minister Binali Yildirim made the statement after tanks were spotted shutting down portions of the Bosphorus and Fatih bridges in Istanbul and military jets were seen flying low over residential areas in Ankara.

According to Agence France-Presse, the bridges were shut down by an internal security military group known as the gendarmerie.

A video circulating online, which can be seen below, reportedly shows one of the aircraft flying over the city.

Update, 4:36 p.m. EST: Turkey Blocks, which tracks government censorship efforts within the country, reported that Twitter, Facebook, and YouTube were blocked in the country at 10:50 p.m. local time.

Update, 4:53 p.m. EST: AFP reported that, according to state media, the country's top general is being "held hostage" at the military's headquarters.

Update, 4:59 p.m. EST: US Secretary of State John Kerry said in a press conference that he did not "have any details" regarding the reputed coup in Turkey.

"I hope there will be stability and peace and continuity within Turkey," he said. "But I have nothing to add with regards to what has transpired at this moment."

Update, 5:11 p.m.: Sky News reported that, according to a military statement read on state television, a "peace council" is now in control, and has criticized President Recep Tayyip Erdogan's administration for "eroding" secular government.

Update, 5:39 p.m. EST: AFP reported that Erdogan has asked supporters to defy a military-imposed curfew and take to the streets. According to a Sky News live report from Ankara's central square, about 30 to 40 people had followed the request.

Update, 6:08 p.m. EST: Sky News posted video of a tank swerving to avoid protesters holding the country's flag on a bridge, which can be seen below.

Also, France24 aired footage of Erdogan conducting an interview via the FaceTime phone app, which can be seen here.

Update, 6:49 p.m. EST: Sky News aired footage of apparent gunfire near Istanbul's airport, which can be seen below.

Gunfire is heard near Istanbul Airport after the Turkish military said it had taken over the country https://t.co/ia767GiXWu

Also, The Daily Beast reported that Erdogan is seeking asylum outside the country, and has already been denied passage to Germany.

Update, 7:08 p.m. EST: AFP reported that, according to NTV television in Turkey, a helicopter carrying "coup plotters" was shot down by military aircraft.

Buzzfeed also posted video of what appears to be a helicopter firing toward people walking across a road in Ankara, which can be seen below.

Video appears to show helicopters firing on the ground in Ankara, Turkey pic.twitter.com/X3Dpd4xXxN

Update, 7:19 p.m. EST: The AP reported that 17 officers were killed in a helicopter attack on police special force headquarters in Ankara.

Update, 7:39 p.m. EST: AFP confirmed that the military has opened fire on crowds of people gathering in Istanbul amid the coup.

Update, 7:44 p.m. EST: Journalist Mehmet Solnaz posted footage of soldiers supporting the coup eing pushed out of an administrative building in the Sakarya Governorate by residents. At one point, one of the residents shakes hands with a soldier, as seen here.

Pro-coup troops taken out of Sakarya Governorate by the people of the city pic.twitter.com/Ngj22sV6on -Similar videos shared from across Turkey

Another video, posted by journalist Bora Bayraktar, shows what he called a pro-coup officer convincing other troops to abandon the coup while he was in handcuffs. It can be seen below.

Exclusive @euronews An officer surrenders, handcuffed and talks to others to quit pic.twitter.com/MNIMNAn71Y

However, the AP reported that the national parliament building in Ankara was hit by a bomb, despite a statement by a national intelligence spokesperson that the coup had been "repelled."

Update, 8:00 p.m. EST: Wikileaks posted footage of a helicopter opening fire at what it described as the headquarters of the national intelligence agency, which can be seen below.

CBS News also posted video of a crowd gathering to protest in front of a tank in the midst of the coup attempt.

Protesters in Turkey in standoff with military officers; crowd gathers in front of tank https://t.co/yxTFc4XDh5 pic.twitter.com/nah6cYnWPM

CNN Turk is streaming live in the midst of the occupation, and can be seen below.

Update, 8:49 p.m EST: According to the AP, police and military forces have exchanged fire in Taksim square in Istanbul.

Update, 9:42 p.m. EST: AFP reported that according to Prime Minister Binali Yildirim, more than 120 people had been arrested in connection with the coup attempt.

Update, 10:30 p.m. EST: The AP reported that 42 people have been killed in "attacks" in Ankara, citing the local prosecutors' office.

Sky News is airing live coverage, which can be seen below.