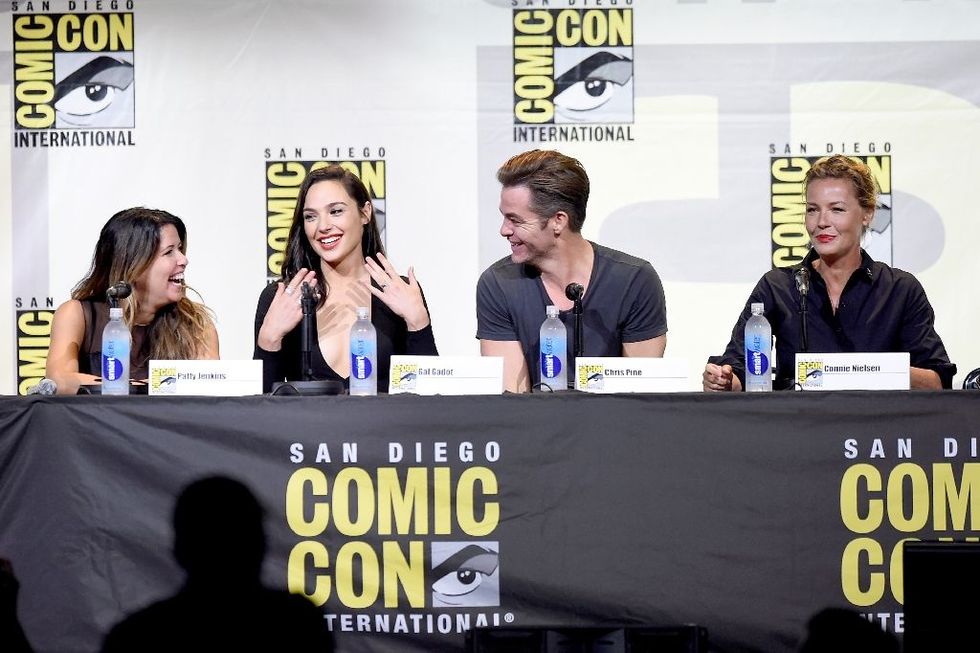 Warner Brothers pulled back the curtain on its slate of upcoming blockbusters on Saturday at a star-studded presentation to thousands of die-hard San Diego Comic-Con fans.

The studio took over the fanfest for two hours, with Conan O'Brien as host, to premiere its hotly anticipated DC Comics movies and non-superhero offerings.

A beat-boxing Will Smith was joined by Jared Leto, Margot Robbie and director David Ayer for "Suicide Squad."

Next spring's "Kong: Skull Island" was presented by Tom Hiddleston, Brie Larson and John Goodman and there was a first look at Harry Potter spin-off "Fantastic Beasts and Where to Find Them" with Eddie Redmayne and Colin Farrell.

Warner's first exclusive of the session was a sneak peek at "Wonder Woman," which saw the Amazonian -- alias Diana Prince -- moving away from the lush island of Themyscira into modern civilization.

Near the start of the action-packed trailer soldier Steve Trevor, played by Chris Pine, asks Prince: "Have you never met a man before? But what about your father?"

"I had no father. I was brought to life by Zeus," Wonder Woman replies.

The movie is scheduled to hit theaters on June 2, 2017, focusing on a character introduced earlier this year in "Batman v Superman: Dawn of Justice."

"It's an honor and a privilege," a visibly trembling Gadot told the Comic-Con devotees about bringing the character to the big screen.

"She has the heart of a human and the strength of a goddess."

Robbie's comic book baddie Harley Quinn is one of the most hotly-anticipated characters among all the films due to emerge from Warner's "DC Extended Universe" films.

The studio premiered the first trailer for "Suicide Squad," which comes out on August 5, at last year's Comic-Con and has since released plenty of footage.

Fans were ecstatic nevertheless when they were shown the film's final trailer, which featured the bubblegum-popping Quinn using her martial arts skills to dispatch an adversary in an elevator.

"Everyone was doing all this action -- I was doing it wearing heels," Robbie said of the shoot, which took place last year in Toronto and Chicago.

Zack Snyder took to the stage to treat fans to an unexpected first trailer for his latest movie "Justice League," which is due for release on November 17 next year.

The Flash (Ezra Miller), Cyborg (Ray Fisher) and Aquaman (Jason Momoa) make up the remaining members of the crime-fighting team.

The joke-laden trailer is a marked contrast from "Batman v Superman," which was heavily criticized for its dark tone and taking itself too seriously.

At one point in the preview, Batman turns to Aquaman, smiling mischievously and asks: "I hear you can talk to fish?"

Superheroes may have dominated the day, but a first look at next year's "Kong: Skull Island," drew the loudest gasps from the Comic-Conners.

The movie, like previous incarnations, focuses on an expedition to Kong's home island but this time is set in the 1970s.

The trailer hinted at a distinctly military flavor to Jordan Vogt-Roberts's take on Kong, offering a split-second first look at the giant ape after two minutes of helicopters and explosions.

"What's not cool about choppers and napalm and King Kong?" the director said.

Finally, Oscar-winning actor Eddie Redmayne hit the stage alongside Colin Farrell to show off a new trailer for "Fantastic Beasts and Where to Find Them," which comes out on November 18.

For a few minutes there was magic in the room as Redmayne handed out wands to the entire audience, leading them in shouting "lumos maxima!" to light up the hall.

In previous years much of the footage shown at Comic-Con, America's largest pop-culture convention, has been exclusive to the fans present in Hall H.

Studios have begun dropping footage online simultaneously, however, in response to leaks of bootlegged footage at previous conventions.

Warner's trailers can be seen on its YouTube channel at