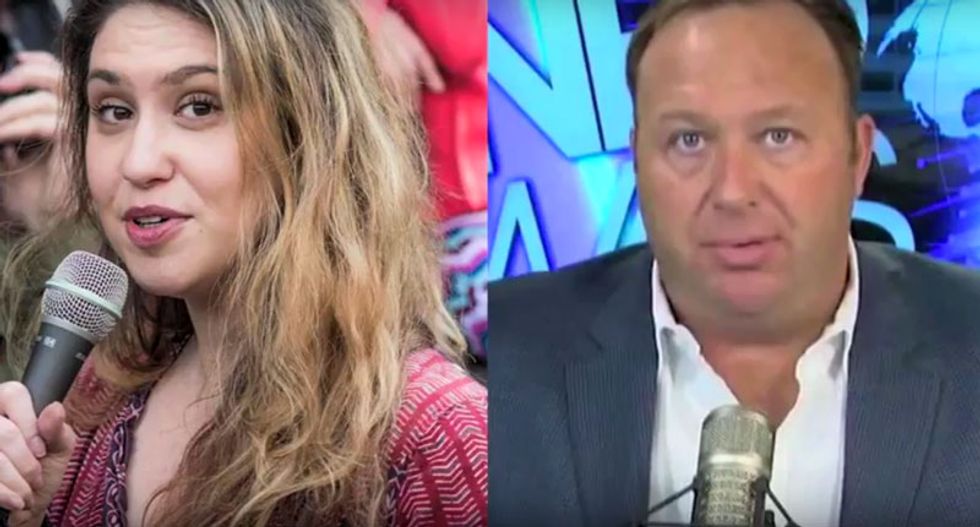 I've been having a great time at the RNC. I took my photo with Herman Caine, Sean Hannity, and, as of this afternoon, got to interview Info Wars host Alex Jones on the street! I must say, his skin looked great. And I now  know why: he had just been given a moisturizing Turkish Dorean facial, which consists of comedian Jimmy Dore spitting Ice Tea in your face after you try to crash a live broadcast of The Young Turks.

Jones rolls thick and deep, surrounded by an entourage of dudes who look like they've booby-trapped their homes in preparation for a government invasion of their houses and at least one man who is an actual shofar-playing, born again Christian, with who I had spoken days before.  Yet I was able to talk to Jones as he and his crew walked down the streets. And I wasn' even wearing my "Make America great again," camo hat. Here is our exchange, presented without further commentary.

Katie Halper: Are you enjoying yourself?

KH: Where is the biggest threat of tyranny coming from?

AJ: From our globalists that are running our government into the ground.

KH: And between Hillary and Trump?

AJ: Or, there’s no choice, Trump all the way.

Shofar-Player: Hillary’s a witch, she’s into witch craft, she’s a jezebel. We all know who she is.

KH: And any reservations about Trump?

AJ: Yeah, I don’t like some of the torture stuff, but at least he’s honest about it. With Hillary, she wants to mount America’s head on the wall.

AJ: It means she just wants to piss all over the country like a big fat goblin.

KH: And any other messages for people?

AJ: Well, we’re standing up. The day’s of laying down are over so get ready for a fight. You wanna fight? You better believe you got one.