WATCH: In speech of her life, Hillary Clinton to say US at moment of reckoning 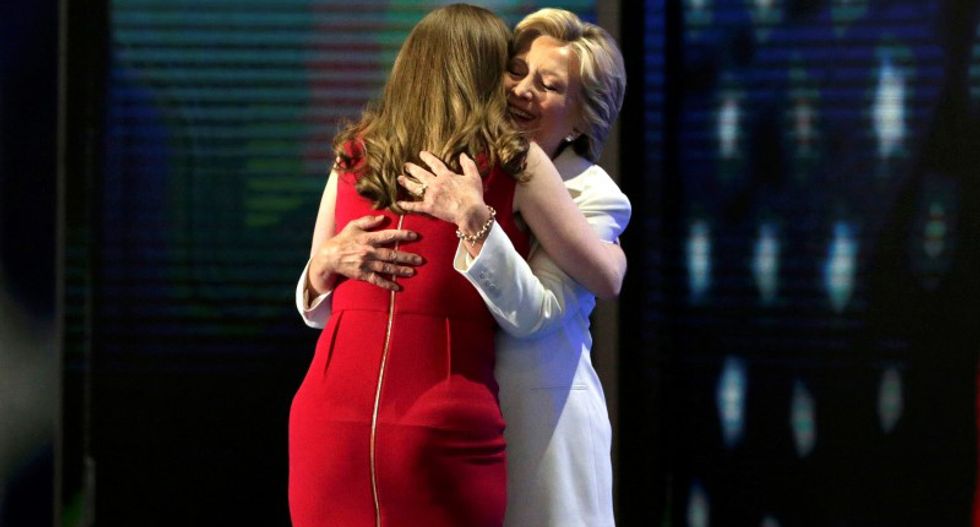 Democratic presidential nominee Hillary Clinton is greeted by daughter Chelsea Clinton as she arrives to accept the nomination on the fourth and final night at the Democratic National Convention in Philadelphia, Pennsylvania, U.S. July 28, 2016. REUTERS/Gary Cameron

U.S. presidential candidate Hillary Clinton will tell the Democratic National Convention on Thursday that Americans must work together to conquer domestic and foreign challenges that threaten to tear the country apart.

In the biggest speech of her more than 25-year-old career in the public eye, Clinton will sound the themes that will propel her campaign against Republican Donald Trump in the Nov. 8 election.

"America is once again at a moment of reckoning. Powerful forces are threatening to pull us apart. Bonds of trust and respect are fraying," Clinton will say in accepting the Democratic nomination, according to excerpts of her speech.

"And just as with our founders there are no guarantees. It truly is up to us. We have to decide whether we’re going to work together so we can all rise together," she will say.

As she prepared to deliver her speech, sources familiar with the matter said the FBI is investigating a cyber intrusion at the Democratic Congressional Campaign Committee (DCCC) that may be related to an earlier hack at the Democratic National Committee.

The breach and its potential ties to Russian hackers are likely to sharpen concern, so far unproven, that Moscow is trying to meddle in the election. The issue has clouded this week's convention in Philadelphia.

In her speech Clinton will say she will work to create more opportunities and more good jobs with rising wages, and confront stark choices in battling "threats and turbulence" around the world and at home.

"No wonder people are anxious and looking for reassurance - looking for steady leadership," she will say.

It is Clinton's turn in the spotlight after days of electrifying speeches by party heavyweights such as President Barack Obama, Vice President Joe Biden and first lady Michelle Obama praising Clinton and cautioning that Trump would be dangerous and divisive.

It will be a difficult and high-stakes task for the guarded Clinton, 68, known to be a more effective politician in small gatherings than on big stages.

Clinton, vying to be the first woman elected president in U.S. history, needs to make a convincing argument she can bring about change while representing the legacy of Obama, who is nearing the end of his second four-year term with high approval ratings.

She must make inroads with voters who find her untrustworthy or unlikable, as her favorability ratings in polls have hit all-time lows.

In his speech, Obama offered an optimistic view of the United States that he contrasted with Trump's vision of a country in crisis.

Clinton was likely to offer a similarly upbeat message, drawing on an idea that has driven her throughout her career, that all Americans should be given the chance to fulfill their potential, a campaign aide said.

Trump, a 70-year-old New York businessman who has never held political office, is running just ahead of Clinton in a RealClearPolitics average of recent national opinion polls. They both garner high "unpopularity" ratings.

The Republican nominee has hammered Clinton as untrustworthy, and Republicans depict her as a Washington insider who would continue what they see as the failed policies of Obama's presidency.

Trump rejected the optimism voiced at the Democratic convention, saying Democrats were talking about "a world that doesn't exist" and papering over Clinton's problems and mistakes.

"I propose a different vision for America, one where we can break up Washington's rigged system, and empower all Americans to achieve their dreams. In our vision, we will put America First," he said in a statement.

Chelsea Clinton, who spent eight years of her childhood in the White House when Bill Clinton was president, will introduce her mother on Thursday evening.

Rosa Patlan Harris , 70, a retired postal worker and delegate from Texas, said she thinks Clinton can measure up to the high expectations for her speech.

"I think she can handle it," said Patlan Harris, a long-time supporter of the former secretary of state. "You know she's tough."

The Democratic gathering began on a note of discord on Monday, with backers of Bernie Sanders, the U.S. senator from Vermont who lost the nomination to Clinton, noisily booing the very mention of her name.

But protests inside the arena calmed after the tumultuous first day. After two nights of speeches meant to unify the party and show a more personal and warmer side of Clinton, the third night featured a sharp turn to attacking Trump.

Taking aim at Trump's campaign promise to "Make America Great Again," Obama said: "America is already great. America is already strong. And I promise you, our strength, our greatness, does not depend on Donald Trump."

Biden called Trump an opportunist with no clue about how to make America great. Vice presidential nominee Tim Kaine, a U.S. senator from Virginia, said Trump was a "a one-man wrecking crew" who could not be trusted in the Oval Office.

Joyce Lalonde, a retired elementary school teacher and delegate from Michigan at the Democratic convention, was eagerly anticipating Clinton's address as a milestone for women.

Lalonde, 68, recalled how she and her fellow female teachers once protested her school district's requirement that women wear dresses or skirts and how times had changed for women.

"It was a man's world!" Lalonde said. "Men didn't have to go through what women had to."

Watch the speech below and read the full transcript here.