WATCH: Millennial goes on Fox News to assure aging viewers that young people are all horrible 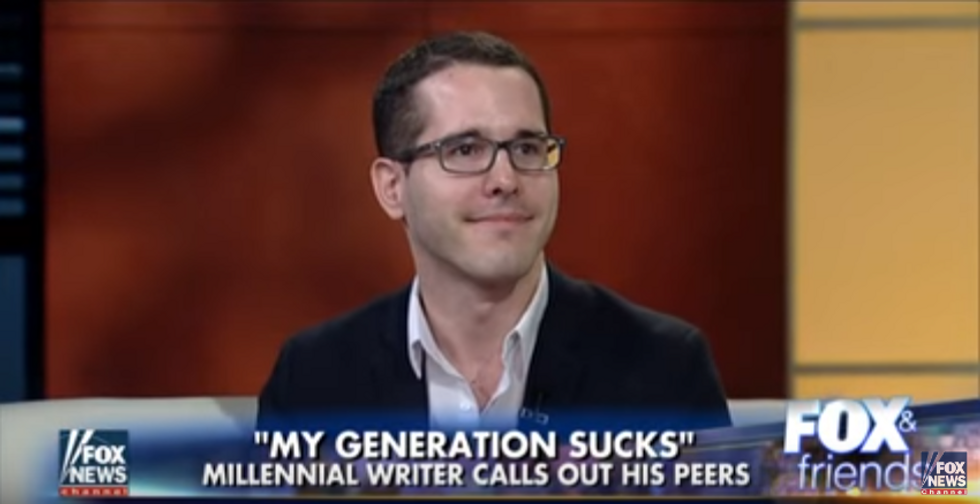 The median age of a Fox News viewer is 67 years old -- and that means they love watching segments talking about how awful young people are these days.

Fox & Friends on Thursday decided to invite millennial New York Post writer Johnny Oleksinski on the program to explain why people in his generation are all terrible human beings.

Oleksinski is in the news for writing a New York Post column with the title "I'm a millennial and my generation sucks." On Thursday, he told Fox & Friends that the initial response to his speech was overwhelmingly positive... until some dastardly millennials caught wind of it and started sending him mean tweets!

"Those tweets are scathing," Oleksinski breathlessly told the show.

He then explained that he hates his generation because they sit inside all weekend and binge watch Netflix while using Snapchat. He also said that millennials have the habit of blaming others for the fact that their lives are going poorly, which is totally different from how Trump-loving Fox News viewers blame undocumented immigrants as the reason they haven't gotten a pay raise in years.

Later in the segment, he confessed that, "My baby boomer friends are some of my best friends."

It goes without saying that any millennials who are tempted to set even one foot onto Oleksinski's lawn should resist the urge at all costs.

Check out the whole segment below.