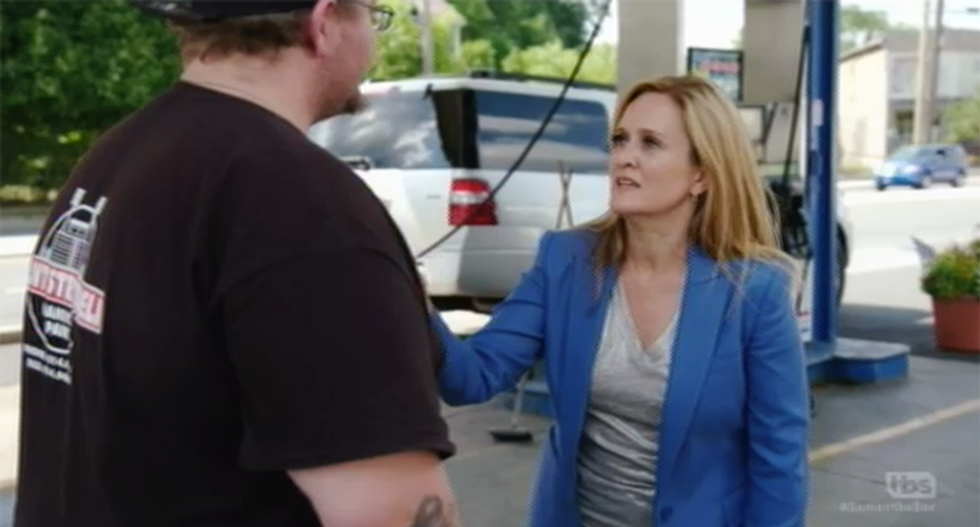 Samantha Bee decided her adventure to the Republican National Convention should be via bus, so the crew at "Full Frontal" bought the bus that belonged to former Republican candidate for president, Herman Cain. Then they set out on a surprising "shucky ducky" adventure.

One young woman Bee met at a stop in Pennsylvania claimed that she is a Trumpette for Donald Trump looking for a trumpet to sound the call to "take our country back." She met a young man who gleefully proclaimed his allegiance to Hillary Clinton, which prompted Bee to call him the belle of the ball and twirl him. Bee also met a first-time voter who declared that she has absolutely no idea what the hell she's going to do.

Given how big Pennsylvania is and that Bee had to scoot over to Cleveland, she sent her friend Alana over to York County for the Mason-Dixon County Fair. Those hanging around the livestock show seemed to all be leaning Trump. Notably, a white man who insisted Trump isn't a racist. "Just because of people I know who consider themselves racists," he explained.

When it comes to Hillary Clinton, this crowd wasn't ready to support her at all. "I don't see it bein' a smart idea to put a woman in office," one man in a cowboy hat said.

"I don't either," the woman next to him said.

"I mean, I'm not sexist or anything," the man continued. "But when it comes makin'... makin'," Alana clarified that his statement was pretty sexist. "Nah, I mean, it's my opinion."

"I feel the same way he does," the woman said. "Cause, we don't need a woman as a president. We really don't. We're too dramatic." A note appeared on screen saying that the woman worked as a professional truck mechanic.

"But if someone said that about you and you were working on their truck?" Alana asked the woman.

"And how does that make you feel?" Alana asked. "Do you think they're right?"

Ahh America. Bee closed the segment giving her a hug that lasted an awkwardly long time.