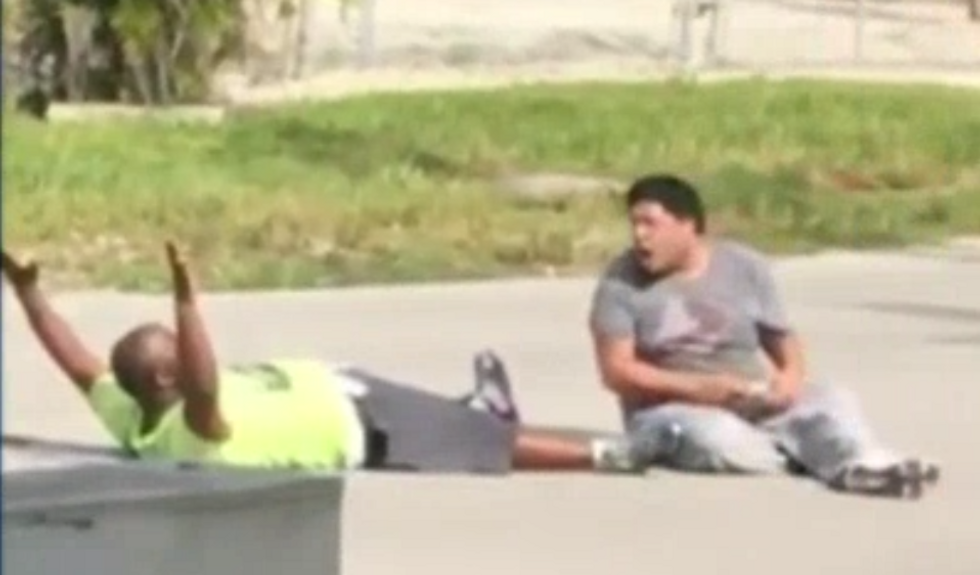 A witness to the North Miami police shooting of unarmed black caregiver, Charles Kinsey, said he tried to warn officers that Kinsey and his patient were unarmed.

In an interview with the Associated Press on Friday, Thomas Matthews, a retired African-American flower shop owner and longtime North Miami resident, said that using binoculars while sitting outside near the intersection where the shooting occurred, he noticed that Kinsey's patient, an autistic man, was holding a toy truck. Matthews claimed he tried to tell a cop who was doing crowd control, but she told him to back away.

Soon after, AP notes, North Miami cops fired three shots, and Kinsey, who was trying to persuade his autistic patient to come back with him to the mental health facility where the therapist worked, was wounded in the leg. A video of the lead-up to the shooting has drawn national attention in the days that have followed.

"If she would have told the other officers, maybe they wouldn't have shot," Matthews told AP.  "But I guess with all the shootings that are going on, they are nervous and shook up."

AP reports that North Miami police's shooting of Kinsey comes in the aftermath of weeks of violence surrounding police officers and the citizens they are supposed to protect. In Baton Rouge on Sunday, three cops were shot dead, and two weeks ago, five officers were killed by a gunman at a Black Lives Matter protest in Dallas. The targeting of police officers is seen by many as a response to the recent police-related killings of two black men, Alton Sterling at a Baton Rouge convenience store and Philando Castile at a Minnesota traffic stop.

As Raw Story reported earlier Friday, John Rivera, the head of Miami-Dade’s Police Benevolent Association, the city's police union, said the officer who shot Kinsey was actually trying to shoot his autistic patient, in an attempt to protect the caregiver. Apparently, Rivera said, the officer thought the toy truck the patient was holding was actually a loaded gun.

Raw Story notes that Kinsey was complying with the police's orders to lie on the ground with his hands up, and was trying to get his patient to do the same. But the autistic man ignored Kinsey, and a SWAT officer fired three rifle rounds as he took cover behind a squad car, 50 yards away from the two men at the intersection.

According to the North Miami police, the SWAT officer fired his weapon after he heard over his radio that the autistic man was loading a gun. But as Raw Story writes, Kinsey repeatedly told the cops that neither he nor his patient were armed, begging them not to shoot. When the officer shot Kinsey, the caregiver asked him why, but the cop replied he didn't know.

“The officer told my client, ‘I don’t know’ — that was his words verbatim,” said Kinsey’s attorney, Hilton Napoleon. “Another officer asked, ‘Why did you shoot this guy?’ and the shooting officer said he didn’t know why he shot him.”

While Kinsey’s story was avoidable, the therapist was fortunate to survive his encounter with police. According to The Counted, a project of The Guardian that gathers data about police killings in the US, 599 people have been killed by cops so far this year. Of those, 40 were killed in Florida, and 12 of those killed in the Sunshine State were African-Americans.