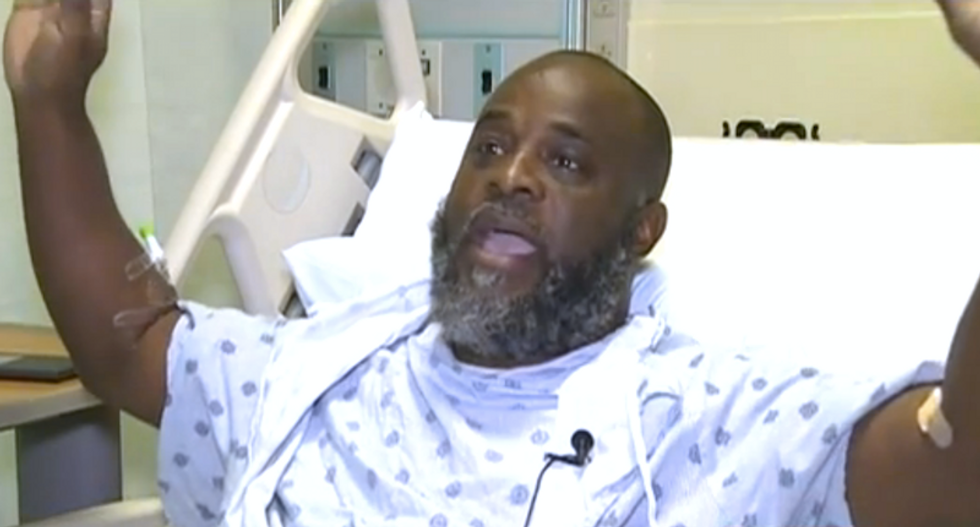 North Miami police offered a weird excuse for the officer who shot and wounded a black, unarmed hospital caregiver tending to an autistic man.

The head of the Florida city's police union said the officer, whose name still has not been released, actually meant to shoot the autistic man playing in the street with a toy truck, reported the Miami Herald.

John Rivera, head of Miami-Dade’s Police Benevolent Association, said the officer was actually trying to protect the caregiver, Charles Kinsey, from his autistic patient by firing three shots from a military-style rifle.

But he apparently missed and shot Kinsey instead.

Video showing most of the encounter has been released, and the shooting has gained international attention.

The officer's name has not been released, but Rivera described him as a 30-year-old Hispanic man who had been on the force for four years and earned unspecified awards as an officer.

Rivera said the SWAT officer feared the autistic man's toy truck may have been a weapon and fired at him as the 23-year-old sat on the ground near Kinsey.

The officer had been called to investigate reports that an armed man was threatening to kill himself in the area, and police found Kinsey and his patient sitting on the ground.

Kinsey was trying to coax the man back inside a nearby mental health center.

Police ordered the men to lie down with their hands up, and the 47-year-old Kinsey did just that.

But the autistic man ignored the police orders, and the officer fired three rounds from the rifle as he took cover 50 yards away behind a squad car.

Police said he fired after another officer warned over the radio that the autistic man was loading a weapon -- which turned out to be a toy truck.

One bullet struck Kinsey, who has been hospitalized with a leg wound but is expected to recover.

Kinsey has said he repeatedly told officers as he lay on the ground that neither one of them had a weapon and begged them not to shoot.

After the officer shot him, Kinsey asked him why -- but the SWAT officer said he had no idea.

"The officer told my client, ‘I don’t know’ -- that was his words verbatim,” said Kinsey' attorney, Hilton Napoleon. “Another officer asked, ‘Why did you shoot this guy?’ and the shooting officer said he didn’t know why he shot him.”

Napoleon said he was already in settlement negotiations with the city's police department.