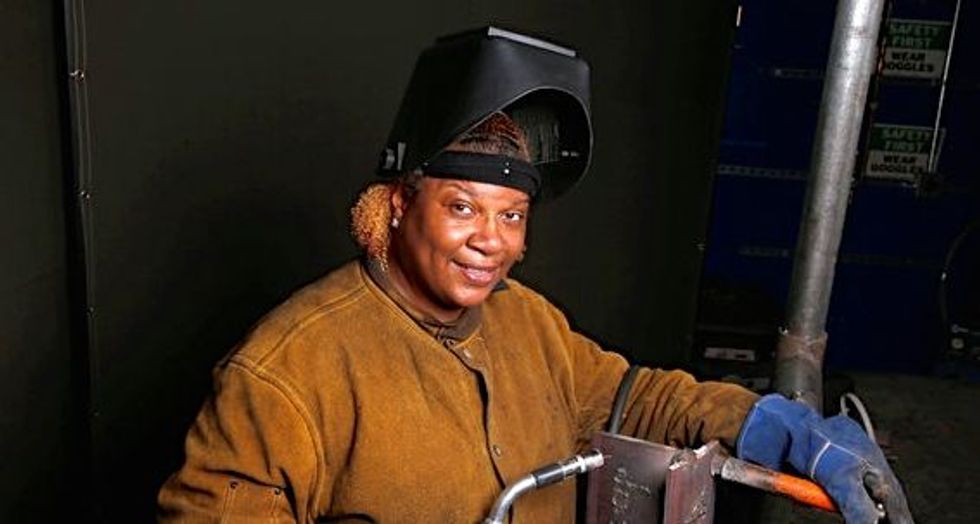 Dr. Linda Liau works with the precision of a master, peering into a patient's head with magnifying loupes as she removes a brain tumor.

When Liau was called into an emergency room as a surgeon more than 20 years ago to help treat a car crash victim, another member of the medical team assumed she was a nurse.

Even today, the 49-year-old neurosurgeon sometimes gets a surprised reaction from new patients who were expecting a man.

Such an assumption is common in career fields dominated by men.

Neurosurgery, welding, venture capitalism, construction, film directing and the electrical trade - these are six jobs where U.S. women have made inroads but are still vastly outnumbered.

And one position, U.S. president, has never been filled by a woman. With presumptive Democratic nominee Hillary Clinton seeking to become the first to break that barrier, several women in career fields made up mostly of men told Reuters that they saw her candidacy as significant.

"I think ultimately the goal would be to be gender-blind completely, so the fact that we're even talking about having a female president as a novelty is, in a way, sad," Liau said.

On a construction site, Joundi White, 31, has often been reminded of her gender. Early in her career, the reminders were pet names such as "sweetheart" and "honey." Now, she can rarely shake the sense that she is outnumbered.

"I eat lunch alone," White said. "I don't have people to relate to at work.

"Don't get me wrong, I identify more with the guys, but to them, ultimately, I'm just a girl."

Wearing a hard hat, White passes under heavy steel beams, walking along the commuter train tracks she is helping build in her working-class neighborhood in southern Los Angeles.

Welder Darlene Thompson, 45, is also no stranger to the construction site, or to the hostility that she says women often encounter in the field. These days, she teaches others as an instructor at Los Angeles Trade Technical College.

In a heavy coat and blue gloves, she looks from under her helmet at the white-hot flame of a welding torch.

It was a fight to learn these skills. More than a decade ago, when she began receiving job training as a welfare recipient, Thompson had to argue for the chance to study welding. Public assistance administrators wanted to push her toward cosmetology or culinary arts, she said.

Thompson did not say how she would cast her ballot in November but said she would not vote for Clinton just because the candidate is a woman.

Republican presidential nominee Donald Trump's slogan has resonated with her.

"When they talk about 'Let's make America great again,'" Thompson said, "what I think of is the companies in Detroit, the automotive industry going back to Detroit and giving back jobs."

A well-paid job as an electrician has opened up opportunities for Hannah Cooper, 28. For one thing, she was able to buy a house in the expensive Los Angeles real estate market.

Sometimes, she will encounter someone on a construction site who knows her mother, Kelly Cooper, who also was an electrician.

"Everyone remembers her because there's only a few women," Cooper said.

Kelly Cooper began as an apprentice in 1975.

She is now director of construction for the Los Angeles Department of General Services.

Eva Ho, 44, is a woman working in the technology field, which is unusual enough. But she is also a venture capitalist, which is rarer still.

"In some ways the V.C. career has really been an old boys club, and it's been dominated by white men for the last three or four decades," Ho said.

A graduate of Harvard and Cornell, Ho said she was drawn to work in technology because of its ability to drive social change. But she came late to it, never having used a computer until college.

For the Burtons, who work together as filmmakers through their company Five Sisters Productions, their career had its seeds in their childhood as the daughters of a writer and a former professional musician.

Both parents were feminists who thought their five daughters could do anything, said Ursula Burton, a director, producer and actor.

Now the possibility of a female president could help create more opportunities for women, she said.

"Having a woman president opens up the presidency for girls," Burton said, "and it will shift the perception for boys of what girls can do."