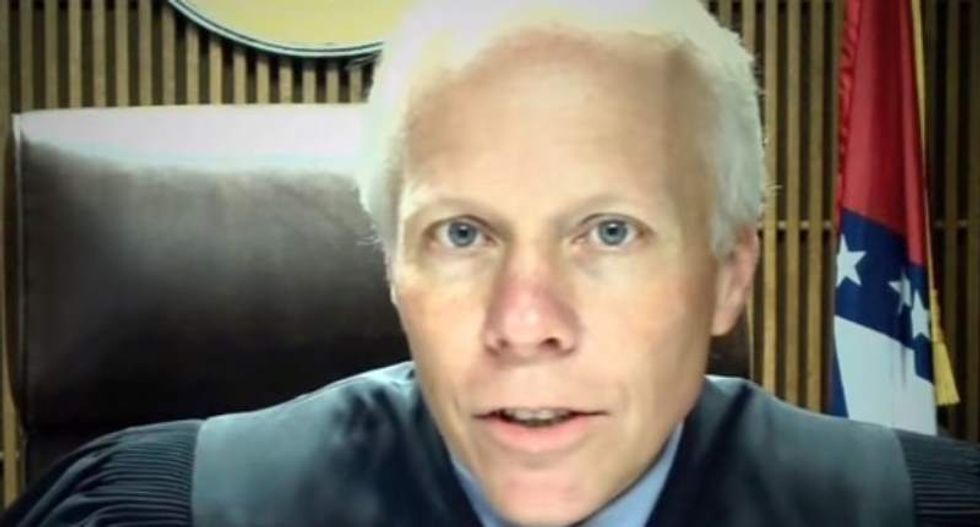 A judge in Sherwood, Arkansas is accused of running a "modern-day debtors' prison" that victimized a 44-year-old cancer patient, among others, the Huffington Post reported.

"People are doomed for failure when they appear before the court, and most significantly trapped in this never-ending cycle of expanding debt," said Kristen Clarke, president and executive director of the Lawyers’ Committee for Civil Rights Under Law. "With the resurgence of debtors' prisons, we will continue to see people cycle in and our of jails and prisons across our country merely because of their inability to pay fines and fees tied to low-level, nonviolent offenses."

Sherwood District Court Judge Milas "Butch" Hale's conduct while leading the court's "hot checks division" is the focus of a lawsuit filed this week by the American Civil Liberties Union of Arkansas. Acting in this capacity, Hale sentenced Lee Robertson to 90 days in jail for owing the court $3,054.51. Robertson has been living with pancreatic cancer since 2009, which has affected his ability to pay back past debts.

But according to the suit, Robertson and his fellow defendants unknowingly sign away their right to an attorney in order to be let into the courtroom. The court also bars defendants' family and friends from witnessing the proceedings, and no transcripts are kept of the hearings.

The Associated Press reported that the city raised $2.3 million from fines and forfeitures issued in Hale's court, accounting for 12 percent of the city's budget.

Robertson is one of four plaintiffs involved in the lawsuit. Another plaintiff, 40-year-old Nikki Petree, has paid at least $640 in fines to the city in a case that started over a bounced check for $28.93. The suit stated that she was arrested seven times over that check and was also jailed for at least 25 days.

Hale denied any wrongdoing in a statement to KATV, saying, "We do not run a so called 'debtor's prison' in Sherwood. If a defendant pleads guilty, or is found guilty, of writing a hot check we set up a payment plan. It is only after the third or fourth time that they fail to comply with a court order that we incarcerate."

Watch KATV's report, as aired on Tuesday, below.

'Taking us all for fools': Critics slam Greg Abbott’s defense of his actions in wake of school shooting

Texas Republican Governor Greg Abbott in a press conference that left reporters frustrated defended his actions and insisted his earlier praise for law enforcement's widely criticized response to the Uvalde school massacre was the result of being "misled."

"I am livid about what happened," Abbott declared, blaming others for his "recitation of what people in that room told me."

German judges and experts have arrived at the edge of a melting glacier high up in the Peruvian Andes to examine a complaint made by a local farmer who accuses energy giant RWE of threatening his home by contributing to global warming.

The visit by the nine-member delegation to the region is the latest stage in a case the plaintiffs hope will set a new worldwide precedent.