Arkansas shop owner tells lesbian couple not to hold hands: 'I want this to be a family store' 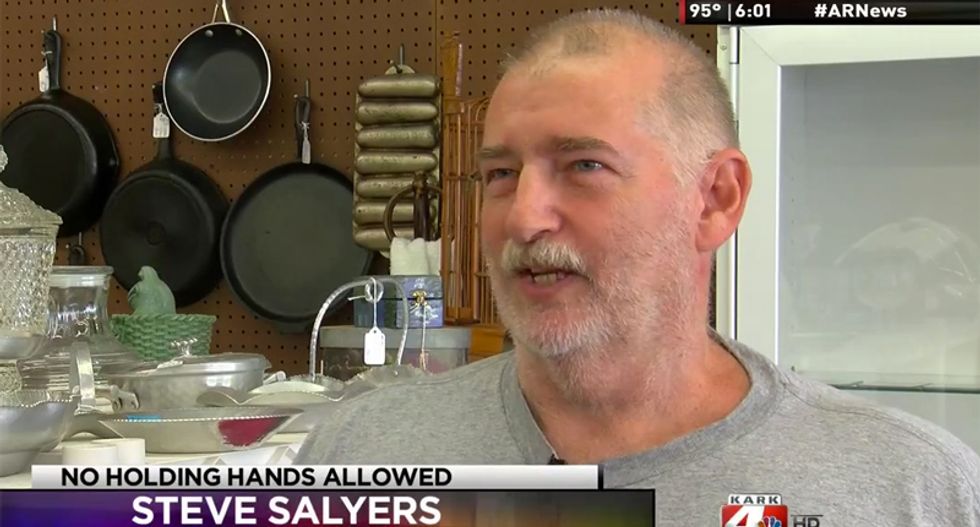 An Arkansas shop owner defended his decision to ask a lesbian couple to stop holding hands in his place of business, saying he wants his store to be "a family store."

According to Ashley Looper, she and her fiance Jessica Perkins were browsing in Spa City Treasures in Hot Springs when owner Steve Salyers admonished them for holding hands.

"They were loving on each other a lot and holding hands and they pretty much did it the whole way through the store," he explained. "I just felt like they were just doing something that was inappropriate to have kids around. That's all. It would have been the same whether it had been regular people or not. I was as polite as I could and said, 'Please don't do it while you're in the store.' Didn't ask them to leave. Didn't escort them outside."

According to Salyers, what he saw wasn't the kind of thing children should see.

"I'm a family person so I want this to be a family store," Salyers said. "It's like I wouldn't want to take my kids to a strip club or something."

Explaining they put back items they planned to purchase and left the store, Looper said there was no reason for Salyers to approach them.

"Holding someone's hand, there's absolutely nothing wrong with that," Looper said. "We're your average couple. We want to be treated that way. I'm not ashamed, she's not ashamed."

"Love is love, and no one else should be able to say anything about it," she added. "I don't judge people for who they're with. We don't want to be judged for who we're with."

Watch the video below via KARK: