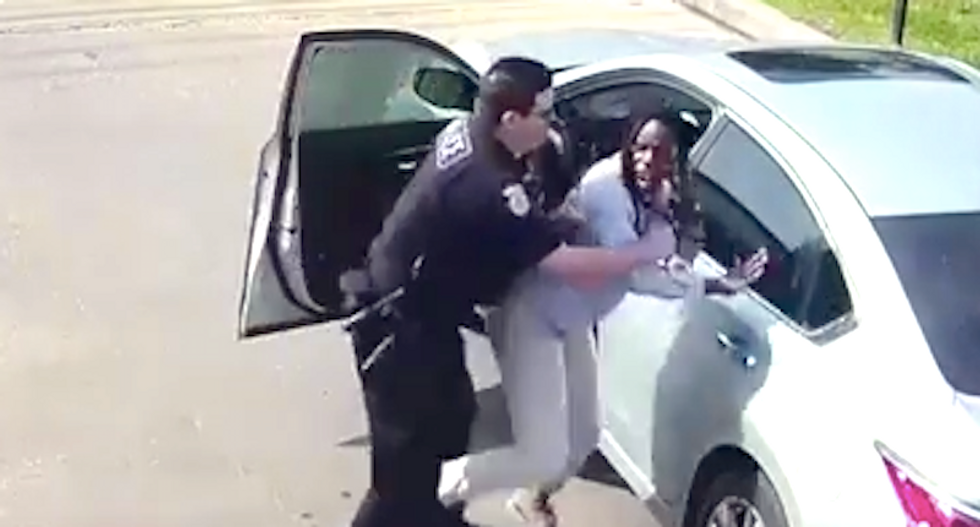 Newly released video disputes police claims about a black social worker's violent arrest earlier this year while talking to a 911 dispatcher during a traffic stop in Houston.

A police officer pulled over Earledreka White in March for crossing the double white line, and she called 911 to ask for police backup because she was afraid of the officer who stopped her, reported the Houston Chronicle.

"I would like another officer to come out here," she says to the dispatcher. "My heart is racing. I'm really afraid."

The 28-year-old White was placed in handcuffs and charged with resisting arrest during the encounter, and then jailed for two days -- where she feared she might end up dead like Sandra Bland, another black woman arrested in Texas following a routine traffic stop.

White said she remained calm throughout the encounter, and she has accused the officer of unnecessarily escalating the situation.

"Being pulled over is not the troubling part -- what happened after being pulled over is what baffles me," White told the newspaper. "As I tell the dispatcher that this man is threatening to 'Tase' me, he backs away, then comes back and literally tries to break my arm."

The Metropolitan Transit Authority of Harris County investigated the incident in April and determined the officer had done nothing wrong -- but surveillance video released by White's attorneys appear to back her account.

That video -- which police viewed during their investigation -- shows White talking on the phone to a dispatcher, who agrees to send another officer to the scene.

The officer, later identified as Gentian Luca, stands close to White, who is also standing outside her car, with the driver's side door open.

White tells the dispatcher she felt "harassed" by the officer, who at that point grabs the woman and tries to pin her arms behind her back as she screams for him to stop.

"This man is twisting my arm," she tells the dispatcher. "Please get your hands off of me. What is wrong with you? … Why are you doing this? I haven't done anything."

White told The Final Call that she tried to explain what had happened to other officers who arrived at the scene, but she said they discussed among themselves what charges on which to arrest her.

She was then charged with resisting arrest and search, a misdemeanor that carries a potential six-month sentence, and jailed for two days on $1,000 bond.

White filed a complaint with the MTA afterward, but police said they would not provide any information about whether the officer would be disciplined.

The president of the Houston NAACP said the officer was within his rights to ask White to get back into her car, but he said the officer escalated the situation by threatening to use his Taser to force her to comply.

"He got impatient," said James Douglas, the NAACP president. "This is obviously a police officer who needs some training on how to de-escalate a situation, and I would think it would be especially important in today's climate."

White's lawyer, who agreed to take the case pro bono after watching the video, said charges should be dropped against his client, who is worried that a conviction would wreck her professional licensing.

"I'm as pro-law-enforcement as they come, but that's not good police conduct," said attorney Zack Fertitta said. "You can't escalate a situation and then claim someone is 'resisting arrest.' That's ridiculous."

Watch video of the traffic stop posted online by LiveLeaks: