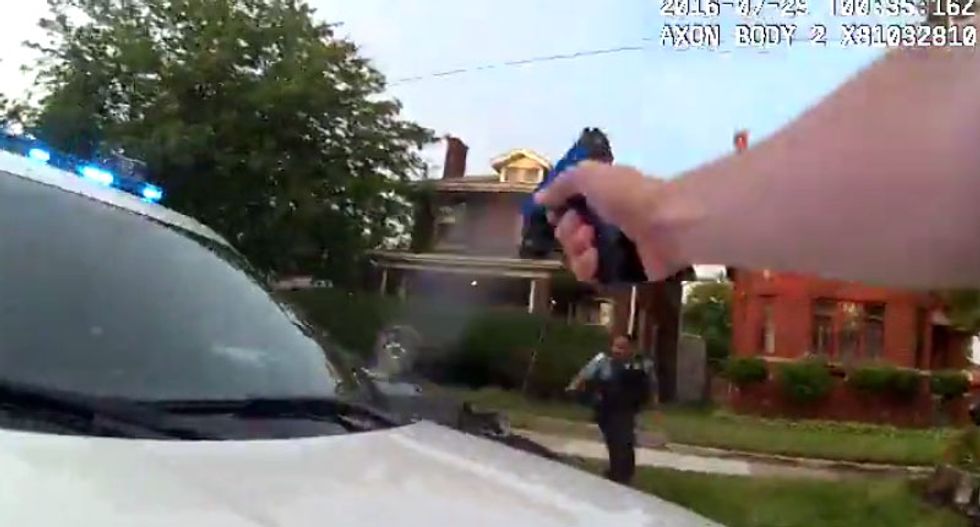 Police pursue Chicago resident Paul O'Neal, who died of a gunshot wound to the back (Screen cap).

Chicago police on Friday released body camera footage related to the shooting of an unarmed black teenager -- but the videos themselves don't show the actual shooting.

The footage shows police pursuing 18-year-old Chicago resident Paul O'Neal, who had been suspected of stealing a car.

Police officers fired shots at the vehicle as it was driving away -- as The Chicago Tribune notes, "The city’s use of force policy explicitly bars police from shooting into a car when the vehicle represents the only danger."

Police are then seen pursuing O'Neal through a residential neighborhood, although the only perspective we get is from an officer who was running well behind the officer who shot O'Neal.

We do hear several shots being fired in the video, although by the time the officer wearing the body camera catches up to the other officers, O'Neal had already been shot and was being put into handcuffs. O'Neal would subsequently die from a gunshot wound to the back.

The officer who shot O'Neal was equipped with a body camera, although there is apparently no footage from his perspective. Police are investigating whether he intentionally turned his camera off.

Per CNN, Sharon Fairley, head of Chicago's police oversight board, called the video "shocking and disturbing" but cautioned that it "is not the only evidence to be gathered and analyzed when conducting a fair and thorough assessment of the conduct of police officers in performing their duties."

Police warned of the potential for civil unrest just before releasing the video.

Check out the body camera footage showing the pursuit of O'Neal below.