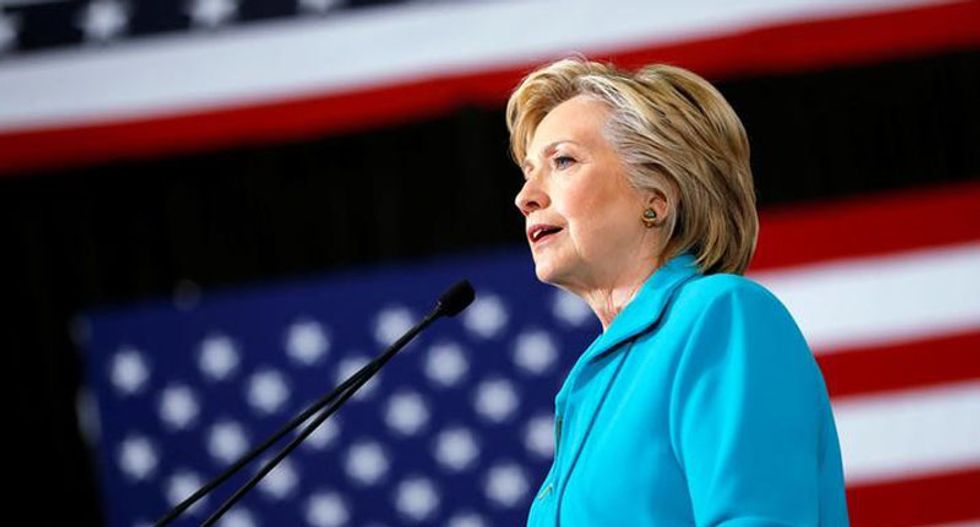 In a foreign policy speech meant to reach out to Republican and independent voters, Democratic President Hillary Clinton on Wednesday will argue for a robust commitment to U.S. leadership in the world and tout the idea of "American exceptionalism."

A Clinton aide said she would contrast her foreign policy approach with that of Republican Donald Trump, who puts the emphasis on what he calls an "America first" vision that includes a crackdown on illegal immigration and opposition to multinational trade agreements such as the Trans-Pacific Partnership.

Clinton, a former secretary of state, plans to appear at 12:30 EDT (1630 GMT) at a convention of the American Legion veterans' group in Cincinnati.

"In her remarks to the American Legion, Hillary Clinton will make the case for American exceptionalism and call for maintaining America's military and diplomatic leadership in the world," the Clinton campaign aide said.

"She will argue for maintaining America's strong commitment to the alliances that keep us safe, the values that make us great, and the men and women in uniform who represent the best of our country," the aide added.

In a comment that has sparked criticism from many Republicans, Trump has called the U.S.-led NATO military alliance obsolete although he has since pledged to work with NATO to defeat Islamic State.

Clinton, who will face Trump in the Nov. 8 U.S. election, has racked up endorsements from a number of prominent Republicans, including Brent Scowcroft, a national security adviser to two Republican presidents and Richard Armitage, a deputy secretary of state under George W. Bush.

Clinton's speech comes as she picked up an endorsement from James Clad, a former deputy assistant secretary of defense under Bush.

In an effort to bolster his own foreign policy credentials, Trump announced on Wednesday he will travel to Mexico to meet President Enrique Pena Nieto.

The use of the phrase "American exceptionalism" is an attempt to court Republican voters who not only are wary of Trump but also some who differ with Obama’s foreign policy.

He has since unequivocally embraced American exceptionalism but Republicans have used the 2009 comment to hammer what they see as a foreign policy approach that is overly deferential to U.S. allies and multinational institutions.

In his statement endorsing Clinton, Clad echoed the Democratic candidate's criticism that Trump, a New York businessman with no experience in government, as lacking the temperament and judgment to serve as commander-in-chief.

"In razor sharp contrast to her opponent, Secretary Clinton is ready, steady and prepared," Clad said in a statement released by the Clinton campaign.