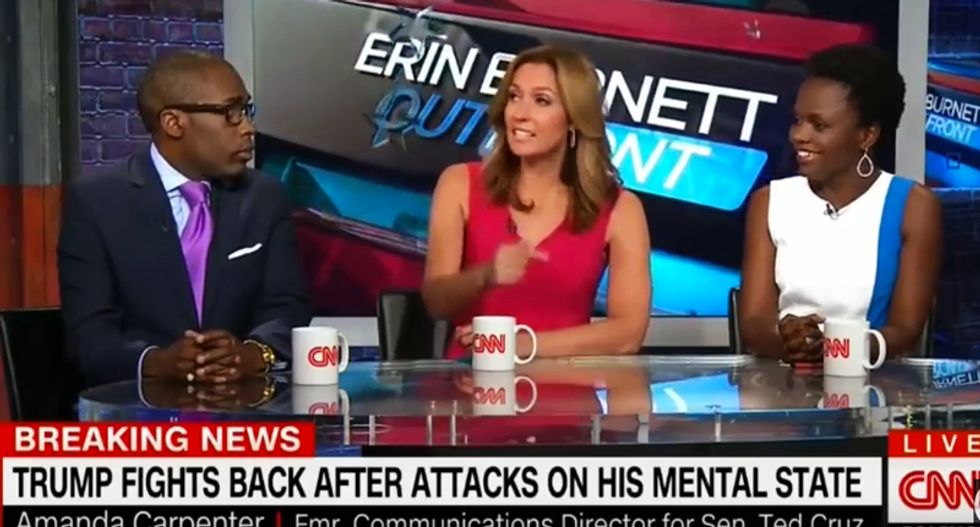 During a panel discussion on CNN Friday night, host Erin Burnett took up the subject that has been on everyone's minds following the events of the past week: Is Donald Trump mentally ill?

The first four days of the previous week were littered with outright lies, out-of-control outbursts and manic airing of petty grievances by Trump that has seen onservatives not only withdraw support, but also fuel rumors that the Republican Party was looking for a way to dump Trump before the election.

On CNN's Outfront, guests hedged their bets over whether Trump might suffer from a potentially debilitating mental condition that would put the country in danger should he become president, with one panelist admitting he could be "crazy like a fox."

New York Times reporter Alex Burns got the panel started by stating, "When you look at polls testing the match-up between Trump and Clinton, his temperament, his personal capacity to perform the responsibilities of the presidency is probably the biggest hurdle for him, just outside of various things he had done to offend various groups of voters."

Adding that voters he has interviewed are beginning to question Trump's mental state, Burns added, "I was talking to a Republican donor today who said the same thing, 'I used to think he was crazy like a fox, now I'm not sure it's like a fox'"

"Here's the thing. I think it is ridiculous for serious people to seriously question Donald Trump's mental capacity," she began. "What is happening is that he is driving the rest of us insane. He says these things deliberately to get a charge. He traffics on conspiracy theories to stir it up. He likes to stir up traffic on-line."

"He's doing it to us, he's not insane," she continued. "I agree with you [indicating Karine Jean-Pierre], he does know what he's doing. We shouldn't be falling for it."