CNN grills Katrina Pierson with fierce fact-checking over Capt. Khan's death -- and it destroys her 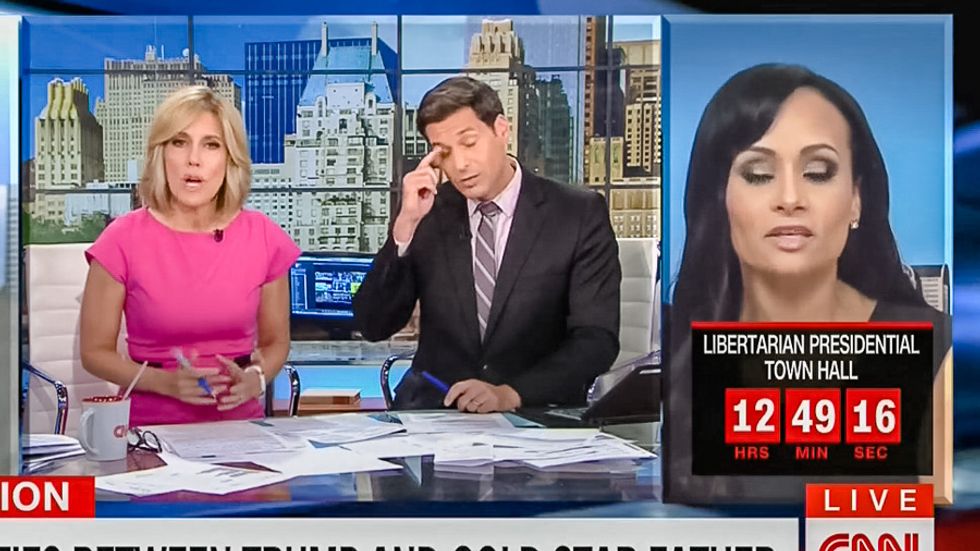 Trump campaign spokesperson Katrina Pierson struggled on Wednesday to defend her assertion that Barack Obama "probably" caused the death of a Muslim soldier who died in Iraq while George W. Bush was in office.

On Tuesday, Pierson had suggested that the president and Hillary Clinton had caused the death Army Capt. Humayun S.M. Khan by changing the rules of engagement in Iraq. But Khan died in 2004, four years before Obama took office.

CNN's Alisyn Camerota and John Berman hammered Pierson on that point when she appeared on the network the next day.

"Do you want to apologize to [Humayun Khan's father, Khizr Khan]?" Camerota asked.

"Apologize for the timeline," Pierson said. "The timeline is very simple and true, Alisyn. Hillary Clinton voted for the war in Iraq. She did not support the surge [after Khan's death]. Barack Obama made things worse by invading more countries."

"But this was in 2004 when George W. Bush was president," Camerota reminded her guest.

Berman repeated Pierson's earlier words, which claimed that "President Obama and Hillary Clinton changed the rules of engagement that probably cost his life."

"You do acknowledge now that there you were just wrong," Berman pressed.

"Absolutely," Pierson replied. "That's why I used 'probably' because I was just going through the timeline. Because since then we have had tens of thousands of soldiers that have been lost. Trump had absolutely nothing to do with it."

(According to iCasualties.org, 4,823 coalition military forces lost their lives during Operation Iraqi Freedom, significantly less than the "tens of thousands" claimed by Pierson.)

"But no one was blaming Donald Trump for Capt. Khan's death," Camerota noted. "You were blaming President Obama. He wasn't president yet."

"It's indicative not just of her but it's indicative of this campaign," he explained. "It's exactly what Capt. Khan's father was talking about. It's about decency and respect. And until we can get back to that playing field, all else is moot."

"Donald Trump did not vote for that war, period!" Pierson exclaimed. "That's why this is a ridiculous conversation. Donald Trump had nothing to do with sending troops into Iraq in the first place."

"Katrina, he doesn't stand for it, he never has stood for it," the CNN host insisted. "He carries around the U.S. Constitution. He abides by the Constitution."

"That's what he said," Pierson shot back. "I'm just telling you the report and the document that he wrote were put out there for all to see."

At that point, an audible sigh came from Camerota as the segment ended to cover breaking news about an airplane crash-landing in Dubai.