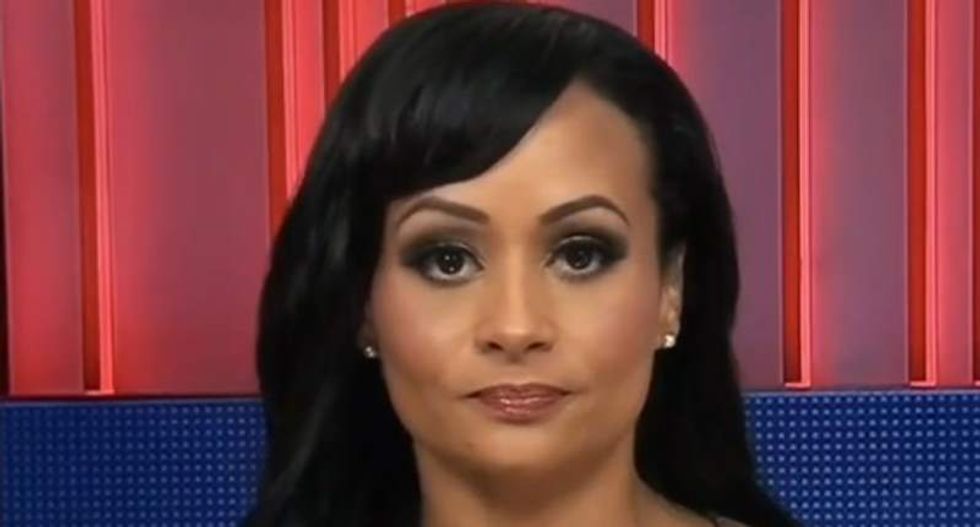 Katrina Pierson admitted on Monday that Donald Trump had no basis for trying to connect Hillary Clinton to Anthony Weiner's latest "sexting" issues. But tried to justify it anyway.

"Mr. Trump, obviously [is] using the scandal to question Secretary Clinton's judgment to say that Weiner might have learned of information through his wife," host Jake Tapper said to Pierson, adding, "There's no actual evidence that he has learned anything classified."

"Well no, which is exactly why he asked the question," Pierson replied. "Huma Abedin is one of the individuals that played a dual role at the State Department, at the Clinton Foundation. We all know now that classified information was recklessly and carelessly handled and he just asked the question. Who knows what he learned and who he told, if he did learn something."

Pierson's speculation was quickly shot down by Democratic strategist Steve McMahon, who said he was questioning Abedin's judgement instead of Clinton's.

"It has nothing to do with [Clinton's] judgement," he said. "You can question Huma's judgement in staying for the third time."

"I don't think it's gonna have any effect at all," he said. "Huma Abedin is an aide to Secretary Clinton. She's not a central figure in the campaign in the sense that her judgement and her choices in her personal life are gonna affect the country."

"There was never a clearer case for 'delete your account,'" said Tapper's other guest, conservative writer Mary Katherine Ham.

As the Los Angeles Times reported, Trump released a statement calling Clinton "careless and negligent in allowing Weiner to have such close proximity to highly classified information" following reports that Weiner had engaged in another round of sexually-suggestive text messages with a woman outside of his marriage with Abedin.

Abedin subsequently announced on Monday afternoon that she was separating from the former Democratic congressman.

On Thursday, The Daily Beast profiled Sam Andrews, a former member of the right-wing paramilitary group the Oath Keepers, who called for the Capitol protesters to arm themselves ahead of the insurrection — and now is trying to distance himself out of fear that the FBI could come after him.

"Andrews was outside the Capitol on Jan. 6, but says he did not enter the building," reported Kelly Weill. "Following Donald Trump's election loss, Andrews appeared in a widely shared video that called on the right to converge on D.C. 'armed, in large groups," as The Washington Post previously reported. Those groups, he said, should show up 'en masse in D.C., armed, demanding, not asking, that we get a peaceful resolution on these voter corruption issues.'"

'Senators Should Be Competent'