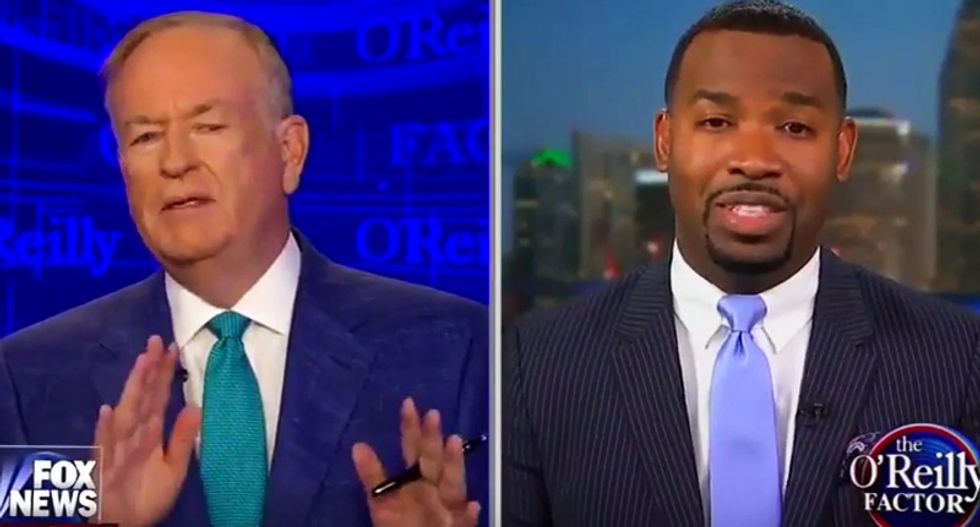 With GOP nominee Donald Trump's campaign failing to make any progress in convincing black voters to give him a shot in November, Fox News host Bill O'Reilly attempted to convince two African American guests that they really should consider the New York businessman because President Barack Obama has "failed" them.

Speaking with attorney Andell Brown and Rev. Jacques De Graff, the Fox host admitted that polls show Trump only garnering 2 percent of the black vote. He then suggested that black voters should take a look at what he called the failings of the past eight years and give the GOP a try.

By taking Trump "out of the equation."

"Why isn't the African-American community saying,'You know what? We had a black president who didn't help us very much. The Democratic Party hasn't really helped us very much. Maybe we go supply-side economics and look for a guy who's going to stimulate the economy that perhaps would be better.' Why don't they do that?" O'Reilly asked.

Attorney Brown pointed out that one can't separate the GOP from their standard bearer.

"Well you also have to look at what Trump has said and done himself, not necessarily being, as you put it, demonized," Brown remarked before reminding the Fox host of a tweet Trump posted that said black people killed 81 percent of white people, before adding, "I mean, that was totally inaccurate."

O' Reilly quickly jumped in to say Trump's tweet was a "retweet" -- as if that made a difference -- before claiming the high ground by stating that he himself had called Trump 'foolish" for reposting it..

As Brown attempted to ask Fox host how black Americans should respond to Trump's "perspective" on them, O'Reilly shouted over him saying "As an an African American guy I would have been outraged."

Turning to De Graff, the Fox host made a similar pitch for blacks to consider jumping to the GOP, saying they might be "better off."

The reverend --who also works as a Democratic strategist --cut O'Reilly short by dismissing his advice.

"Black Americans like any Americans are capable of determining their own best interests," he dryly stated.

Watch the video below, via Mediaite: