'Godd*mn, what is this?': Trevor Noah shocked by chaotic video of cops gunning down unarmed black man 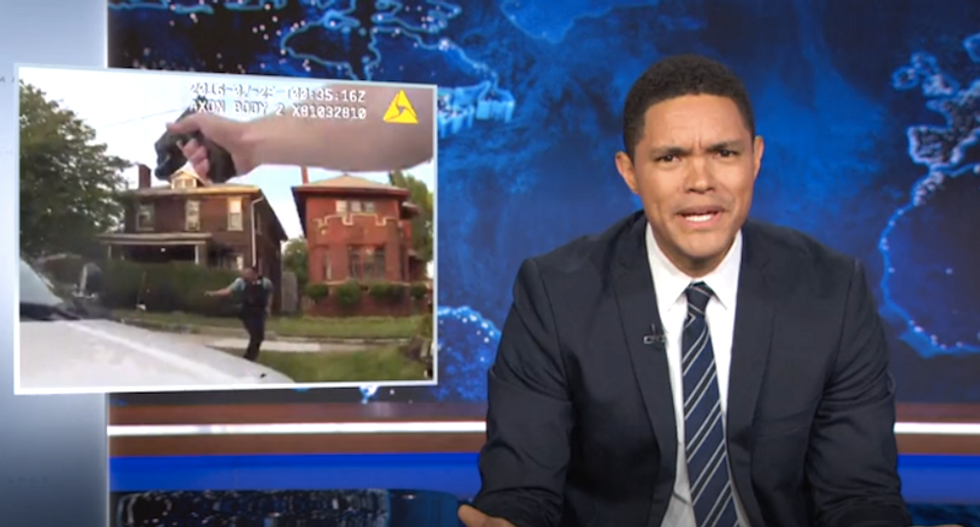 Donald Trump's tornado of a presidential campaign has consumed the news cycle, and Trevor Noah refocused some attention on a fatal police shooting of an unarmed black man in Chicago.

Paul O'Neal was shot and killed by police July 28 after stealing a Jaguar and then leading officers on a foot chase, which video shows ended when police opened fire on the 18-year-old suspect and nearly shot each other.

"The (body) camera's got the whole thing, except the actual shooting," Noah said. "It's a little suspicious, right? Makes you ask the question, why are the police only sloppy with evidence against them? If I run a red light they've got three camera angles and another with J.J. Abrams' commentary track."

Noah said each of these stories sheds a little more light on police violence, and he said the O'Neal slaying showed officers put themselves in danger by shooting toward one another while trying to kill the suspect.

"Goddamn, what is this?" Noah said, after watching body camera video of the incident. "That doesn't look like a professional police video, it looks like your dad trying to play 'Call of Duty.'"

The police have said officers believed they were under fire from O'Neal, who turned out to be unarmed, and Noah wondered why police guns couldn't be manufactured to produce a distinctive sound -- like patrol cars make.

"If you're driving in a car and you hear someone behind you (honk), then you're like, 'Oh, there's a civilian honking,' so you know what you need to do -- you need to tell them to 'f*ck off, because I'm driving over here,'" Noah said. "But you know if you're driving and you hear (a siren), then you go, 'Oh, that's the police,' and then you pull over and you throw the weed out the window."