GOP Sen. Susan Collins dumps Trump for being 'incapable of apologizing' to Khans 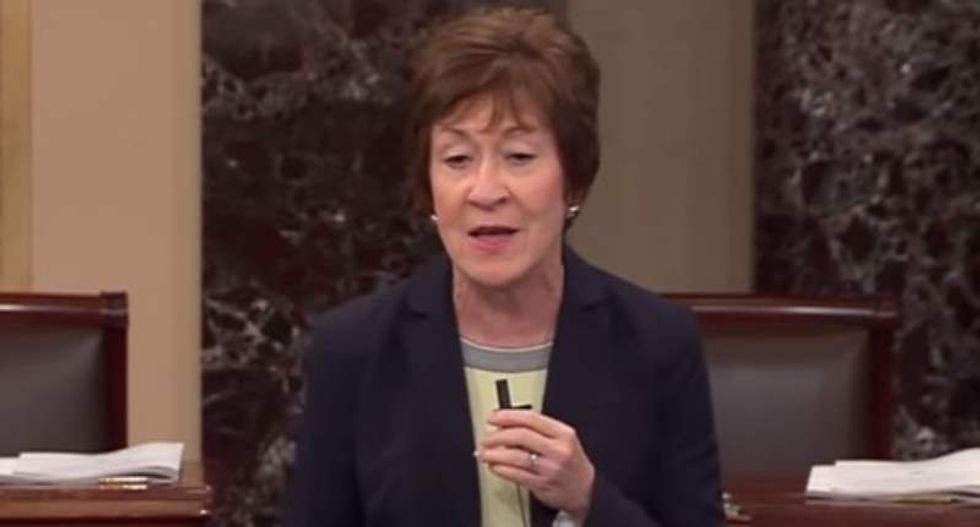 Donald Trump lost the support of another Republican lawmaker on Monday, with Sen. Susan Collins (R-ME) stating she would not vote for her party's presidential nominee in a Washington Post op-ed published on Monday night.

"With the passage of time, I have become increasingly dismayed by his constant stream of cruel comments and his inability to admit error or apologize," Collins wrote. "But it was his attacks directed at people who could not respond on an equal footing -- either because they do not share his power or stature or because professional responsibility precluded them from engaging at such a level -- that revealed Mr. Trump as unworthy of being our president."

She specifically mentioned Trump's verbal attacks against Khizr and Ghazala Khan, the bereaved parents of US Army Capt. Humayun Khan who criticized him at the Democratic National Convention.

"Rather than honoring their sacrifice and recognizing their pain, Mr. Trump disparaged the religion of the family of an American hero," Collins stated. "And once again, he proved incapable of apologizing, of saying he was wrong."

She also cited Trump's rhetoric concerning federal Judge Gonzalo Curiel and his mockery of reporter Serge Kovaleski late last year, arguing that Trump has shown a refusal to tone himself down in the general election.

"Regrettably, his essential character appears to be fixed, and he seems incapable of change or growth," she said.

Collins did not mention in the column who she planned to vote for in November, but she said she did not support either major-party nominee, a possible signal that she would not vote for Democrat Hillary Clinton, either.

"I have thought long and hard about that, for being a Republican is part of what defines me as a person. I revere the history of my party, most particularly the value it has always placed on the worth and dignity of the individual, and I will continue to work across the country for Republican candidates," she said. "It is because of Mr. Trump's inability and unwillingness to honor that legacy that I am unable to support his candidacy."

Last week Republican Rep. Richard Hanna, who represents New York state, stated in his own op-ed that he would vote for Clinton instead of Trump. The New York Times reported that another Republican congressman, Scott Rigell of Virginia, said he would vote for Libertarian candidate Gary Johnson.